MANILA, Philippines — Two days after saying that dolomite dust can cause respiratory illness and other health risks, the Department of Health (DOH) now said visitors to Manila Bay’s “white beach” would not have to worry.

In a statement on Wednesday, DOH said it learned from the Department of Environment and Natural Resources (DENR) that the “white sand” it would be used to beautify Manila Bay is a type of dolomite that is two to five millimeters or 100 times bigger than dust.

DOH also said that “occupational health and safety standards for workers and precautionary measures for the containment of possible dust formation” are likewise being enforced in the implementation of the multi-million-peso project, citing information it got from DENR.

“Therefore, in terms of the general safety of the public who will be enjoying the shoreline once permitted, DOH assures that no untoward incidents will occur as a result of this endeavor,” DOH added. 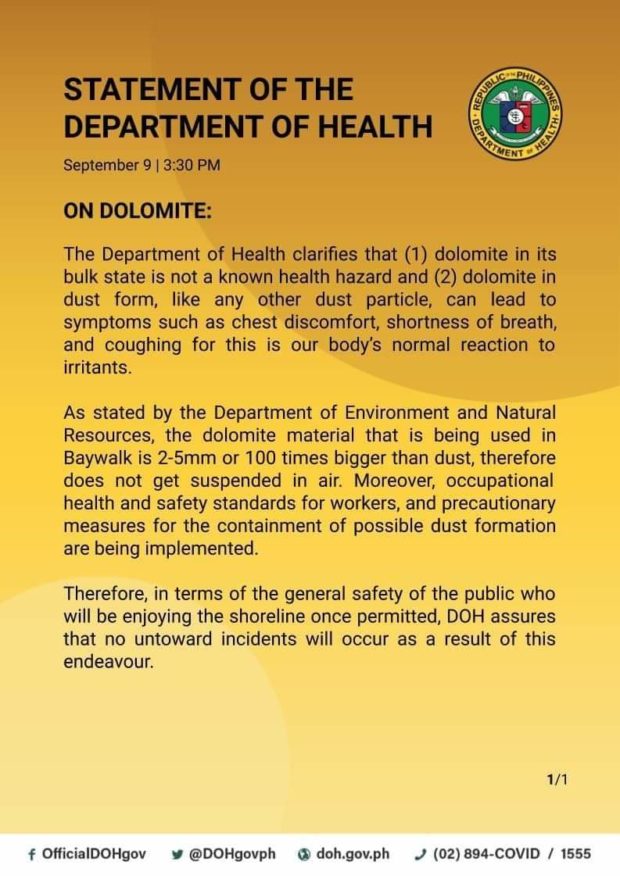 DOH further clarified that dolomite, in bulk state, is not a known health hazard.

But dolomite in dust form, the DOH added, “can lead to symptoms such as chest discomfort, shortness of breath, and coughing for this is our body’s normal reaction to irritants.”

On Monday, DOH Undersecretary Maria Rosario Vergeire said that dolomite dust — which comes from crushed rocks — can cause respiratory issues when inhaled, among other health risks.

READ: Take it from DOH: Dolomite dust can use respiratory issues, other health hazards

DENR Secretary Roy Cimatu, however, insisted that the material used was safe, citing medical studies. The dolomite dust being dumped in the Manila Bay project came from Cebu.

“What is hazardous is the fine silica quads in some dolomite in the form of dust that is generated during crushing and screening,” he added.

If Malacañang really cares for activists’ health, why arrest, jail them? — Bayan