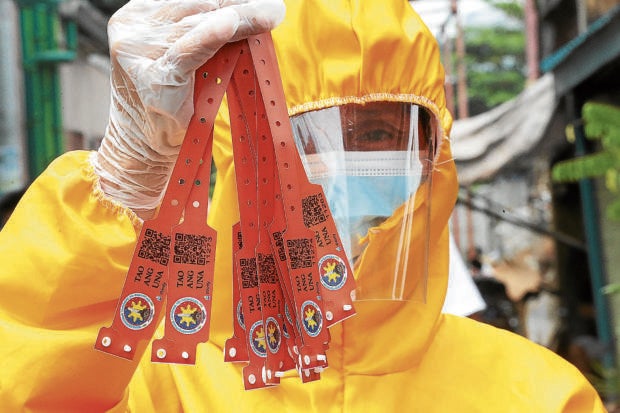 CALL THEM ‘Q BANDS’ A Caloocan City barangay health worker in full protective gear shows off a bunch of quarantine bands that the city government has decided to put on the wrists of residents who have been exposed to COVID-19 patients and are on quarantine for easy monitoring. The bands are red-orange, Mayor Oscar Malapitan’s campaign color, and carry his slogan, “Tao ang Una.” (Photo by GRIG C. MONTEGRANDE / Philippine Daily Inquirer)

MANILA, Philippines — The government will strictly disallow home quarantine for COVID-19 patients, Interior Secretary Eduardo Año said on Tuesday. In a television interview, Año said the government planned to implement the new policy “within the week.”

Año said the joint memorandum of the Department of Health (DOH) and the Department of the Interior and Local Government that allows home quarantine for mild and asymptomatic patients and those without underlying conditions who have their own rooms and bathrooms would be amended to make way for the new policy.

“It’s really best that we isolate everyone, rich and poor,” Año said, adding that the well-to-do should not worry as the government has turned hotels into isolation centers.

“We have COVID-19 hotels where they can be isolated,” he said. “[I]t is very important to get them out of their homes because their family will be infected. That is for the good, for the sake of family members.”

But there would be exemptions, Año said, especially the elderly who could not be moved to isolation centers.

He said health and local officials would look into situations to make sure those who would ask to self-isolate had valid reasons.

Earlier on Tuesday, Carlito Galvez Jr., chief of the National Task Force Against COVID-19, said his group would push for the prohibition of home quarantine and seek complete isolation of people afflicted with the new coronavirus disease.Galvez cited reduced infection rates among families after moving mild and asymptomatic patients from their homes to isolation centers.

He said his group would seek the rescission of the government policy allowing home quarantine for mild and asymptomatic cases, and push for “aggressive isolation” of COVID-19 patients in the Inter-Agency Task Force for the Management of Emerging Infectious Diseases, the temporary government body overseeing the Duterte administration’s coronavirus response.

According to Galvez, Valenzuela City and the province of Bulacan are effectively controlling the spread of the coranavirus by not allowing home quarantine.

He also said the infection rate and the number of cases in Central Luzon, Calabarzon and some cities in Metro Manila, including the capital, had gone down since home quarantine was discouraged in these areas.

Researchers from the University of the Philippines said on Sunday that the Philippines had “flattened the curve,” but the DOH refused to use that term, saying the crisis was not yet over and that the public should continue observing minimum health standards—wearing masks, social distancing, frequent handwashing—to prevent transmission of the virus.In a televised speech on Monday night, President Duterte interpreted “flattening the curve” as having fewer people with COVID-19, and credited the public for it, as most Filipinos observed health measures prescribed by the government. “We had obedience and people followed. That meant a lot and contributed to what is happening now, that there is a flattening of cases,” Mr. Duterte said.He, however, noted that there were “hardheaded” people who behaved as if there were no outbreak and paid for their bravado with a “high rate of contamination.”

But there seemed to be something wrong with the government’s monitoring of cases. Despite the failure of nearly a dozen laboratories to submit results, the DOH still recorded more than 3,000 additional infections on Tuesday, bringing the national tally to nearly 242,000 cases.Of the 115 accredited laboratories, only 81 submitted data to the DOH on time. The health agency said it was in talks with the laboratories to determine why they were unable to submit results.

Earlier, the DOH said timely submission and reporting of cases were necessary to help the government see the true picture of the outbreak.

On Tuesday, the DOH recorded 3,281 additional infections, raising the national total to 241,987 cases.

It was the third time this month that daily new cases went past 3,000. Tuesday’s figure, however, was the lowest of the three. The highest number of cases recorded this month was 3,714, reported on Sept. 4, followed by 3,483 on Sept. 1.

Of the newly reported fatalities, 14 died this month, eight in August, and four in July. Nine of the fatalities were from Metro Manila, four from Central Visayas, three from Calabarzon, two each from Zamboanga, Davao and Mimaropa, and one each from Bicol, Western Visayas and Eastern Visayas. The residence of one patient remains undetermined.