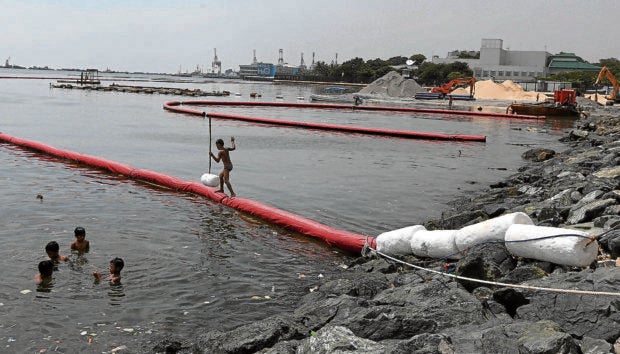 ‘WHITE SAND’ DUMP Children play on floating barriers put up near where the controversial “white sand” is being poured on the shore of Manila Bay as part of a project to rehabilitate the heavily polluted water body. —MARIANNE BERMUDEZ

MANILA, Philippines — The Department of Environment and Natural Resources (DENR) will not stop its controversial “white sand” beach project on a strip of the Manila Bay shore, despite criticism that the earth material being used poses health hazards, and that the fake sand will be washed away over time, causing a huge waste of public funds.

Environment Secretary Roy Cimatu and other DENR officials defended the P389-million project before the House appropriations committee on Tuesday, saying it was part of the government’s long-term efforts in the rehabilitation of Manila Bay, in compliance with a Supreme Court order.

“[The calls for a stop to the project] are unfortunate. However, we believe we have adequately defended our position that the material dumped is not hazardous, as this has been used in many beach areas since 1996 and there has not been any reported problem,” Cimatu said.

Cimatu affirmed his stand as he and other DENR officials faced House members to defend their agency’s proposed P25.6-billion funding for 2021.

The DENR has been under public criticism, mostly expressed on social media, for its dumping pulverized dolomite on a 120-meter stretch of the Manila Bay shore, adjacent to the US Embassy.

According to Cimatu, the project will form a beach spanning 60 meters of that segment of the shore of Manila Bay, which, he noted, is popular among tourists for its sunset.

Cimatu said the particles of the dolomite powder being used on the project was thrice bigger than dust particles, which posed a health hazard when inhaled.

He conceded that silica, which is present in the powdered dolomite, may be hazardous if inhaled, but only during crushing and screening.

According to Cimatu, the “beach nourishment” project is a continuation of the Manila Bay rehabilitation, which was preceded by efforts to reduce the pollution of river water flowing into the bay, as well as desilting of nearby waters that had been found clogged with garbage carried from river tributaries.The DENR reportedly shipped 3,500 metric tons of dolomite from a mining site in Alcoy town in Cebu province to Manila International Container Terminal, about 4.5 kilometers from the project site.

Cavite Rep. Elpidio Barzaga Jr., chair of the House environment committee, spoke about adverse public comments, such as why the DENR was spending P389 million on an artificial sand beach amid the coronavirus pandemic that had seen many poor Filipinos deprived of government aid due to supposed lack of funds.

In response, lawyer Ernesto Adobo Jr., undersecretary of environment for finance, said the P389-million funding for the project was derived from the “contingency fund” of President Duterte, which was released by the Department of Budget and Management in 2019 for the rehabilitation of Manila Bay.

“The DENR has complied with the directive to return 10 percent of our 2020 funding, which is roughly P1.069 billion, purposely to help in the COVID-19 response,” he said.

House Minority Leader Bienvenido Abante Jr. reminded DENR officials that without any effort to stop the dumping of trash and dirty water into the river tributaries of Manila Bay, all efforts, including the “white beach” project, will just go to waste.

“Probably the river with the worst level of pollution is San Juan River, which will just make that white beach black,” he said.

Buhay Rep. Lito Atienza, a former mayor of Manila, said turning the Manila Bay shore into a tourist-friendly area by building an artificial sand beach there was nothing more than a “pipe dream” as long as the bay’s waters remained polluted.

“We are appealing to the DENR, don’t fool the people,” Atienza said in a statement.

He said the waters of Manila Bay would remain “unswimmable and deadly” for as long as the two water concessionaires in Metro Manila, Maynilad Water Service Co. and Manila Water Co., failed to deliver on their obligation to the government to build wastewater treatment plants to stop sewage from flowing directly into the bay.

At the hearing, Jonas Leones, undersecretary of environment for priority programs, clarified that the actual amount used for the dolomite was only P28 million, and the remaining funds would be used for the construction of other support structures, including “geointerventions” supposedly meant to prevent the artificial sand from being washed away.

He said the project was conceptualized in 2019, and was due for implementation in 2020, until it was overtaken by the coronavirus pandemic.

“Cleaning the San Juan River is part of the priority, and we have some plans to clean the esteros with the help of the [Department of Public Works and Highways, or DPWH],” Leones said.A coalition of environmental groups led by Oceana Philippines said on Tuesday that the dumping of artificial sand on the Manila Bay shore “must be stopped and the officials behind this project held accountable.”

The groups also called on the DENR, Congress, the Office of the Ombudsman, Department of Agriculture, Bureau of Fisheries and Manila Mayor Francisco “Isko Moreno” Domagoso to investigate why the project pushed through despite violating at least five national laws.

Domagoso, who earlier expressed support for the project, said he wished the project’s critics “good health” and “good luck” in seeking an investigation.In a radio interview on Tuesday, Environment Undersecretary Benny Antiporda said only a court order could stop the project.

“Now we are still grateful to everyone who had provided their own input on the project, some of them were actually useful for us to improve what we are doing,” Antiporda said. “But [unless] critics truly have strong proof [of potential environmental harm], then we see no reason to discontinue the project.”He said the DENR and the DPWH had their own experts, too.The Department of Tourism (DOT) called on the public to support the project.

“We should not stop the battle of Manila Bay. Let’s rather support it,” Woodrow Maquiling Jr., the DOT regional director, said in a Facebook post.

—With reports from DJ Yap, Krixia Subingsubing, Jodee A. Agoncillo and Jerome Aning