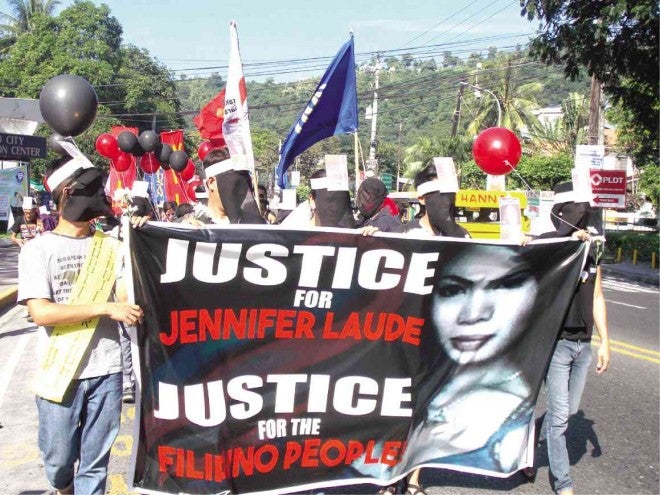 ON THE first death anniversary of transgender woman Jeffrey “Jennifer” Laude, supporters and friends of the Laude family march in Olongapo City carrying banners calling for justice through the conviction of US Marine Joseph Scott Pemberton.

Suarez is also chairwoman of Kaisa Ka and secretary-general of Kilusan, which are both rights groups.

The lawyer’s statement came after Duterte granted absolute pardon to Pemberton, saying that the Philippines did not give fair treatment to the American Marine. Pemberton was convicted of homicide on Dec. 1, 2015 for killing Laude. He was made to suffer six to ten years of imprisonment.

Suarez, however, countered the President’s remark.

From the beginning of the trials of the Laude case, the lawyer pointed out that the Philippines “has not been able to take hold or custody” of Pemberton, but the US did.

“Our very own police, even the court has difficulty serving the summon, notice etc.,” she said.

And during trials, Suarez said that US soldiers were inside the court while the Laude family only had their counsels, as well as the media being barred from getting in. This situation, Suarez added, was “very harassing and intimidating.”

As Pemberton was convicted, Suarez said that the US serviceman was serving his sentence in a “privileged and [air-conditioned]-facility in Camp Aguinaldo with US Soldiers guarding him.”

“His [good conduct time allowance] was ordered by the [Olongapo Regional] Trial Court without even furnishing copies of pleadings and notices to the Laude and counsel, not even to the Public Prosecutor,” Suarez further argued.

The Laude family filed a motion for reconsideration on the Olongapo RTC’s order, but while the court was hearing the motion, it was when Duterte pardoned the US Marine, the lawyer added.

“And you call this “unfair treatment” to Pemberton?” Suarez asked. “This is subserviency! A travesty of our dignity, democracy and sovereignty. A mockery of our legal and judiciary system.”