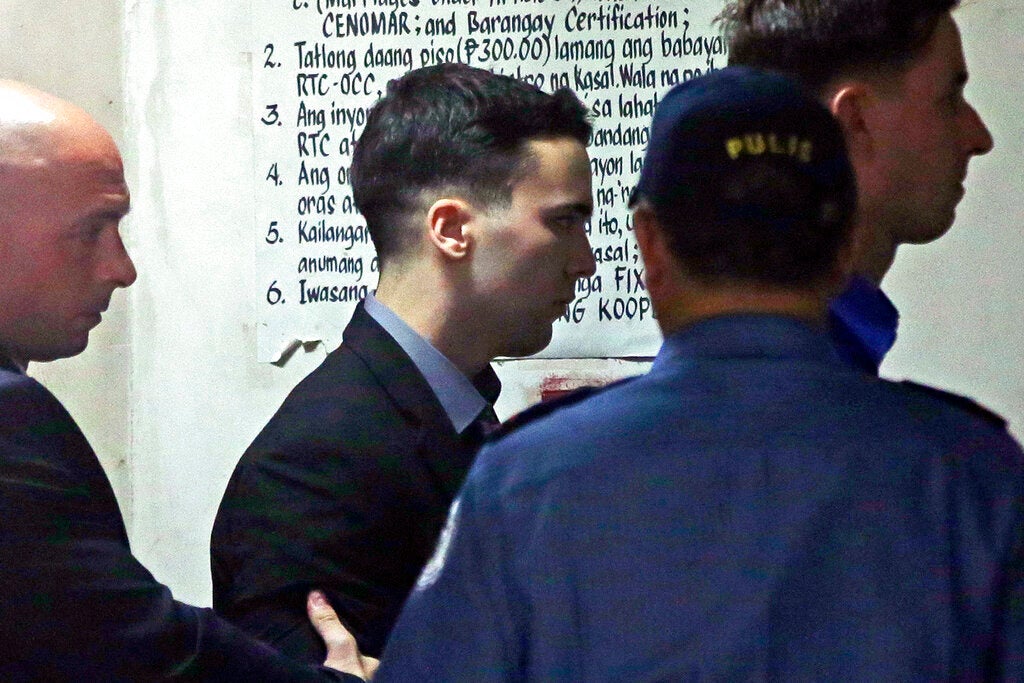 In this Tuesday Dec. 1, 2015 file photo, U.S. Marine Lance Cpl. Joseph Scott Pemberton, center, is escorted as he arrives at court before his conviction of homicide for killing Filipino transgender Jennifer Laude in Olongapo City. (AP)

Lawyer Rowena Garcia-Flores said she talked over the phone with Pemberton on Monday night through the latter’s guard in detention after news broke out that Duterte had pardoned him over the death of transgender woman Jennifer Laude in 2014.

“Basically, I told him about the new development. I told him, ‘Have you heard the news?’ and he said, ‘Yeah, I heard the news.’ So I asked him, ‘How do you feel about it?’ He said he is very happy,” Garcia-Flores told ABS-CBN News Channel.

“He’s like a sort of teenager when he comes to talking and he wouldn’t really tell you long sentences and he wouldn’t discuss in detail his emotions, but I could hear that he is very happy from his voice,” the lawyer added.

Garcia-Flores said she was surprised with the decision of Duterte, adding she didn’t apply for pardon for her client.

Duterte said he decided to pardon Pemberton because the Marine was not treated fairly after opponents blocked his early release for good conduct in detention.

Garcia-Flores said she was hoping that Pemberton would be released by Friday from the restricted facility at Camp Aguinaldo in Quezon City where he is being detained.

“But what I can assure you is that he will not be spirited away from the country and he will comply with whatever requirement there is before he goes out of the country,” she said.

She added Pemberton is hoping to go back to school once he is released from detention.

“He wants to work to support himself in college. I’m not sure if he has plans for now other than to get out of the country,” the lawyer also said.

Garcia-Flores added she will advise Pemberton to write a letter instead of talking directly to the Laude family before his release.

The US marine is “very sorry that all these things happened” and has “always been spiritual,” according to his legal counsel.

“His family is composed of Christian members, and everyday—I don’t know if people will believe it—but everyday, they read the Bible and he even has his own Bible and he would highlight portions that he liked,” Garcia-Flores said.

The lawyer then thanked Duterte for granting pardon to Pemberton, even as the President’s decision raised the eyebrows of critics and the camp of the Laude family.

“I would like to thank him for applying the law to Pemberton and the principle that in case of doubt, then a prisoner should be given the benefit of the doubt and that is under the law,” she said.

“It’s not as if the President was giving extremely special treatment to Pemberton but in case of a gray area he had to comply and decide in accordance with the general principles of the law as well,” she added.

Pemberton was convicted for homicide in 2015 for the killing of Laude and was sentenced to imprisonment from six to 10 years. However, the Olongapo City Regional Trial Court Branch 74 recently granted his early release, saying he had already served the 10-year maximum of his penalty after taking into account the good conduct time allowances he accumulated while in detention.

The court order rekindled perceptions that American military personnel who run afoul of Philippine laws can get special treatment under the allies’ Visiting Forces Agreement, which provides the legal framework for temporary visits by US forces to the country for large-scale combat exercises.

Pemberton, an anti-tank missile operator from New Bedford, Massachusetts, was one of thousands of American and Philippine military personnel who participated in joint exercises in the country in 2014.

He and a group of other Marines were on leave after the exercises and met Laude and her friends at a bar in Olongapo, a city known for its nightlife outside Subic Bay, a former US Navy base.

Laude was later found dead, her head slumped in a toilet bowl in a motel room, where witnesses said she and Pemberton had checked in. A witness told investigators that Pemberton said he choked Laude after discovering she was transgender.

With the Associated Press