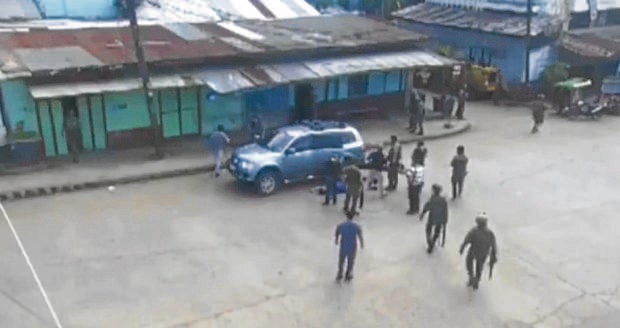 JOLO CRIME SCENE A screen grab from a security camera footage shows the area at the town center of Jolo where four Army soldiers were gunned down by policemen in June. —CONTRIBUTED PHOTO

MANILA, Philippines — Administrative charges have been filed against three top police officials in Sulu province and nine of their men over the killing of four Army intelligence officers in Jolo two months ago.

According to Cascolan, the PNP Internal Affairs Service (PNP-IAS) also filed administrative charges against nine policemen who were named respondents in a criminal case for murder and planting of evidence filed by the National Bureau of Investigation (NBI) in the Department of Justice in connection with the death of four Army soldiers in Jolo on June 29.

The soldiers were pursuing suspected suicide bombers in the Sulu capital when they were accosted by policemen at a checkpoint.

During a hearing conducted by the Senate committee on public order and dangerous drugs last month, the policemen said the soldiers were killed in a shootout despite the accounts of witnesses.

The nine policemen were placed under restrictive custody of the PNP headquarters support service unit and “are readily available to face investigation by the panel of summary hearing officers who will determine probable cause to take further administrative action against them,” Cascolan said.

“I am giving the PNP-IAS (a) free hand in exercising its mandate to determine the administrative liability of the personnel and to impose the appropriate penalty as prescribed under PNP regulations,” he said.

He gave assurance that the 12 respondents in the administrative case would be afforded due process.