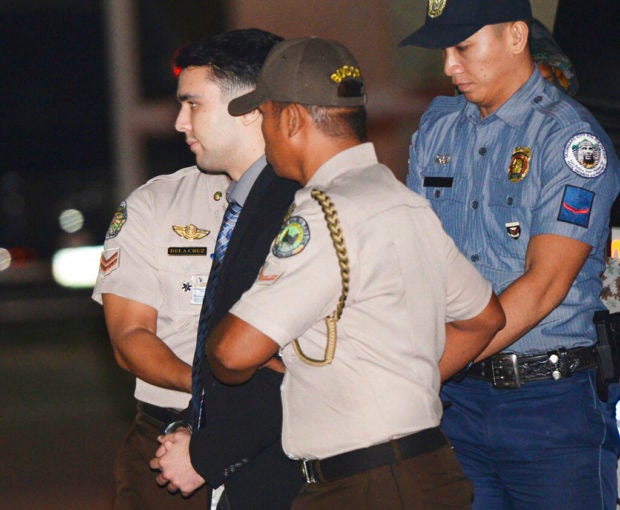 FILE – In this Dec. 1, 2015, file photo, convicted U.S. Marine Lance Cpl. Joseph Scott Pemberton is escorted to his detention cell upon arrival at Camp Aguinaldo at suburban Quezon city, northeast of Manila, Philippines. A Philippine court has ordered the early release for good conduct of Pemberton, a U.S. Marine convicted in the 2014 killing of a transgender Filipino which sparked anger in the former American colony. (Ted Aljibe/Pool Photo, File)

According to lawyer Virginia Suarez, chair of Kaisa Ka and secretary general of Kilusan that are both rights groups, the decision is not only an injustice on the part of Filipina transgender Jennifer Laude but also against the Filipino people.

Pemberton, convicted for killing Laude in 2014, was ordered released by the Olongapo City Regional Trial Court.  However, critics slammed the decision, as Pemberton supposedly served only six of his 10-year sentence.

Duterte on Monday granted absolute pardon to the United States (US) soldier.

“On behalf of the Laude Family and the entire membership of Kilusan and Kaisa Ka, we strongly denounce the absolute pardon given by Duterte. This is another injustice not only to Jennifer Laude and family but a grave injustice to the Filipino people,” Suarez said in a statement.

Suarez, who also helped the Laude family during the legal proceedings, said that Duterte’s move shows the country’s subservience to US despite his leanings towards an independent foreign policy.

“This is a travesty of Phil(ippine) Sovereignty and democracy.  This is another hallmark of Philippine’s subservience to the US. There are too many Filipino convicts, already in their twilight years serving their sentence, why give it to a foreigner, a US soldier who committed an atrocious crime?” she asked.

“Pemberton killing Laude reflects the systematic discrimination and violence inflicted by US to Filipino women, children and the LGBTQ community.  There is so much disrespect in the manner by which Jennifer was killed — reflective of the disrespect US has for the Philippines’ democracy and sovereignty,” she added.

“It was obviously timed to pull the rug under everyone’s feet and pre-empt the possibility of any other adverse result to his case while the legal debate is still brewing on the applicability of the GCTA on him,” NUPL president Edre Olalia said.

“And maybe there is more to it than meets the eye? We are endlessly fed with all iniquitous fare and the law is being used not to bring justice but to perpetuate injustice,” he added. “Indeed, can we blame people who say that our government cannot be relied upon to stand in our corner against foreign interlopers and tormentors?”

Various groups have also condemned the pardon of Pemberton, although they have claimed that it was a decision that was gradually gaining steam, with Duterte’s recent decisions that favored the US.