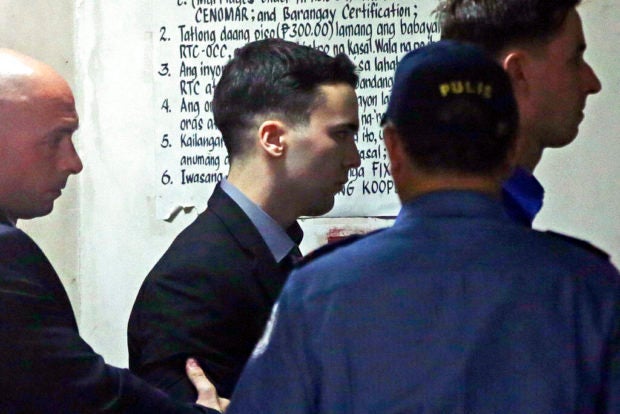 FILE – In this Tuesday Dec. 1, 2015 file photo, U.S. Marine Lance Cpl. Joseph Scott Pemberton, center, is escorted as he arrives at court before his conviction of homicide for killing Filipino transgender Jennifer Laude in Olongapo city, Zambales province, northwest of Manila, Philippines. A Philippine court has on Wednesday, Sept. 2, 2020 ordered the early release for good conduct of Pemberton convicted in the 2014 killing of a transgender Filipino which sparked anger in the former American colony. (AP Photo/Aaron Favila, file)

MANILA, Philippines — The group of lawyers who helped slain transgender Jennifer Laude’s family build the case against US Marine Lance Corporal Joseph Scott Pemberton admitted that the soldier’s pardon was a move they saw coming.

Center for International Law (Centerlaw) said that a premonition had been seen as early as Monday morning — hours before President Rodrigo Duterte pardoned Pemberton — that the latter would be released in any way.

Centerlaw said that Pemberton’s release was not an overnight progress, but a gradual process that stemmed from Duterte’s leanings to the United States (US) — from the administration’s decision to counter previous pronouncements to cancel the Visiting Forces Agreement (VFA) and the purchase of military equipment from the superpower.

“The signs had been there all along — the President’s turnaround on the VFA, Secretary [Teodoro] Locsin’s statements on renewed cooperation between the US and Philippine armed forces in the South China Sea, and even a sale of US helicopters to the Philippines,” Centerlaw said in a statement sent by lawyer Rommel Bagares to INQUIRER.net.

Bagares is one of the lawyers who helped Laude’s family in the legal proceedings.

“And the price we had to pay, among other things, is the freedom for Mr. Pemberton, and the violation of the rights of poor Filipinos like Jennifer Laude, who are deemed insignificant in the scale of things,” Centerlaw added.

In a separate interview with DZBB, Bagares noted that he also felt that a surprise would happen since public opinion was steering against Pemberton’s release — and that Duterte’s answer would be to stop any further court discussions on the issue.

He also claimed that this is a result of unseen agreements between the country and the United States.

Pemberton was found guilty of killing the Filipina transgender in 2014.  While his verdict was to serve a 10-year sentence, an order signed by Olongapo Regional Trial Court Presiding Judge Roline M. Ginez-Jabalde ordered the release of the soldier, as he has supposedly completed his jail time that many contested saying it was only six years.

The order was based on jail time deductions brought by the controversial good conduct time allowance (GCTA).

“Cutting matters short over what constitutes time served, and since where he was detained was not in the prisoner’s control—and to do justice—the President has granted an absolute pardon to Pemberton. Here at the Palace,” he said in a tweet.

Duterte’s decision drew flak again as it was seen by others as a way of giving privilege to an American soldier who committed a crime in the country.

Despite Duterte’s decision to grant an absolute pardon to Pemberton being final, the Centerlaw said that it will discuss the issue with the Laude family.

“Indeed. Centerlaw will confer with its clients. Generally an absolute pardon is treated by courts as a purely political act of the Chief Executive Laude’s case shows Filipinos have remained second-class citizens in their own country, their own welfare being secondary only to those of foreigners,” it added.