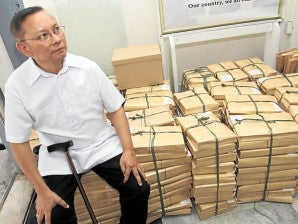 For George Rabusa, exacting accountability from those who benefited from the “fund conversion” in the Armed Forces is as difficult as literally reproducing a 50-page book 4,000 times over.

Armed with a truckload of documents and accompanied by his lawyer and six Catholic nuns, who financed the preparation of the documentary evidence, the retired military budget officer on Wednesday returned to the Department of Justice (DoJ) to make good on his promise to pursue criminal cases against the other persons involved in the misuse of military funds.

He filed an amended complaint, adding five more names to the list of 17 in the plunder case he filed in the DoJ nearly two months ago.

“It is only now that we have completed reproducing the needed documents and obtained the affidavits from additional witnesses,” Rabusa said at a news briefing.

Speaking softly, Rabusa said the files and documents he was presenting as evidence covered the conversion of some P1.5 billion in military funds from 1995 to 2004.

He said the documents included fund receipts, cash advances and fund allotment forms, “many of which were not really authorized.”

The photocopied documents and affidavits in 352 big brown folders amount to more than 200,000 pages, according to Noel Malaya, Rabusa’s counsel.

“These will prove my allegation of conversion and malversation of AFP funds,” Rabusa said.

“Actually, the amounts involved in the conversion [of military funds] were more than P1 billion. But I don’t have documents to include them in my complaint,” he said.

According to Rabusa, Pangilinan may have pocketed more than P88 million when he served as executive assistant of the then AFP chief of staff, Gen. Arturo Enrile, and budget officer of the Army.

Rabusa said Boac, now an assistant defense secretary, received more than P330 million when he was budget officer of the defunct J6 (the Office of the Deputy Chief of Staff for Comptrollership).

In his affidavit, Rabusa described the intricate process of requesting and acquiring funds from J7, J2 (the AFP intelligence unit), and the Intelligence Service of the AFP (Isafp) to finance nonexisting military projects.

He said it was easier to get money from these AFP units because they were engaged in various intelligence works and “psy-ops” (psychological operations).

“Sometimes when we needed more funds, we also use the allocation for the salary of soldiers assigned to Isafp,” he said.

As he had disclosed in Senate hearings, Rabusa said he gave at least P10 million as monthly “support” to the Office of the AFP Chief of Staff.

The bulk of the pilfered funds was used for the “pabaon” and “pasalubong” (sendoff and welcome gifts, respectively) for retiring and incoming AFP chiefs of staff.

Dela Cruz and Mateo admitted that they had regularly set aside 11 percent of the converted funds they facilitated to be released and withdrawn for J6.

According to Dela Cruz, he and Mateo each earned 1.5 percent from the fund conversion, and the J7 chief, 3 percent.

The rest was distributed to the chief accountant, resident auditor and commanding officer of the AFP finance office.

“[These] practices are very clear violations of both accounting and auditing procedures of the government, because the postaudit never happened and no credit advice was issued to Colonel Dela Cruz because his clearing documents never reached the Commission on Audit main office,” Rabusa said.

Nuns to the rescue

Malaya said that because of the volume of the documents that had to be prepared, he and Rabusa decided to seek financial assistance from the nuns belonging to the Association of Major Religious Superiors in the Philippines.

He said the nuns helped buy a photocopying machine and 400 reams of bond paper to prepare 32 sets of documentary evidence, each containing 11 sets of various photocopied affidavits and financial records such as passbooks and checks.

Malaya said the nuns spent close to P300,000 to put together all the needed paperwork.

“The nuns also helped us by providing manpower in preparing the documentary evidence,” he said.