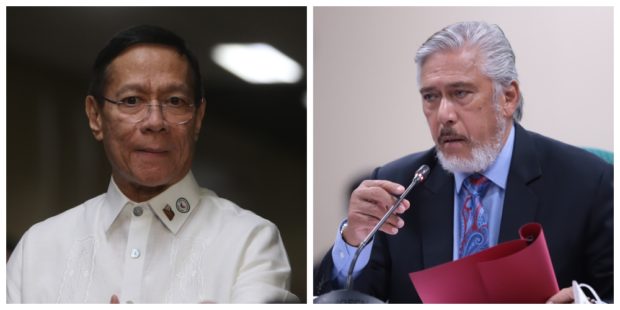 “Our findings were very obvious,” Sotto said of the Senate committee of the whole’s recommendations, which included Duque’s removal and criminal indictment for his alleged role in the massive corruption in the state-run corporation.

“It’s impossible that he did not know (about the fraudulent schemes)… He’s the chairman of the (PhilHealth) board, which governs (the state insurer). It’s clear what ‘governs’ mean. Everything is under his control since he’s also the secretary of health,” he said in a radio interview.

Sotto, who had presided over the Senate hearings, had furnished Malacañang and Justice Secretary Menardo Guevarra a copy of the committee report.

Duque had said that any future charges against him would give him a chance to clear his name.

Told that Mr. Duterte had repeatedly said that he still trusted Duque, the Senate leader said committing illegal acts had nothing to do with enjoying the confidence of the country’s most powerful public official.

“I expect that if the President sees the points we raised, his views will change. He may still trust (Duque), but there are infractions of the law that (Duque) should be made accountable for,” he said.

“It’s clear that (PhilHealth) released funds illegally. If the President sees the committee report, his opinion will be different,” he added.

Besides, Sotto said the President had previously let the ax fall even on his close friends in the government who had been implicated in corruption issues, among them former PhilHealth President and CEO Ricardo Morales.

“It’s not about being trusted or not (by the President). Even if he trusts you, but the evidence or findings of the (Senate) committee proved that you committed an offense, (it will not change what you have done),” he said.

The Senate President reiterated that Duque should be held liable for malversation of public funds as defined under Article 217 of the Revised Penal Code.

Sotto said the health secretary’s claim that he had no knowledge of the allegedly anomalous distribution of the P26.8-billion interim reimbursement mechanism (IRM), a special financial package for COVID-19, would only prove that Duque had been negligent as PhilHealth board chair.

Meanwhile, the Senate leader said PhilHealth should recover the IRM funds that were illegally given to hospitals, dialysis centers and maternity clinics that were not eligible to receive advance payments from the government-run insurance company.

Said Sotto: “They (PhilHealth officials) should be able to liquidate these funds… Aside from the liquidation, we also (directed) PhilHealth to recover the money (that was illegally released).”