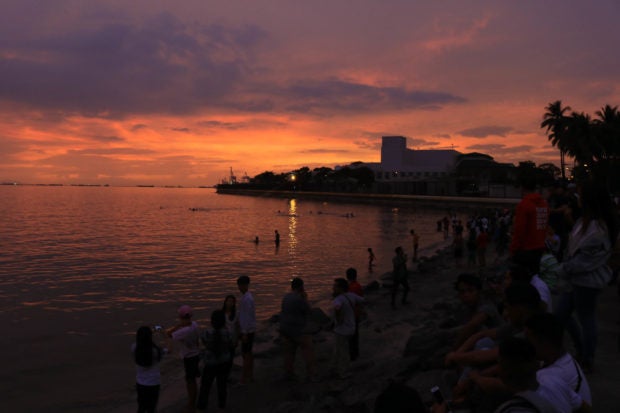 MANILA, Philippines — The plan of the Department of Environment and Natural Resource (DENR) to fill Manila Bay’s shore with white sand did not sit well with environmental groups, saying that the move was “completely absurd and highfalutin.”

In a statement on Wednesday, Pambansang Lakas ng Kilusang Mamamalakaya ng Pilipinas (Pamalakaya) said that the environment department’s plan to dump white sand was an “artificial rehabilitation focusing on aesthetic appearance rather than addressing the environmental degradation problems.”

“The DENR doesn’t have any concrete plan to restore the bay that it resorts to focus on external beautification which is actually a sham and artificial, instead of a genuine rehabilitation,” Pamalakaya national chairman Fernando Hicap said.

DENR Undersecretary Benny Antiporda, in a video message to reporters, clarified that the white sand is actually crushed dolomite boulders which came from Cebu then flown to Manila.

(So it’s just a clarification that this was overlayed in the beach area for that the people to see that the white sand will signify cleanliness.)

(We have engineering interventions that will be done to make sure the bay will be preserved and to sustain the beauty of Manila Bay.)

But Hicap said that filling of the white sand along Manila Bay “would less likely contribute to [its] rehabilitation and restoration.”

Likewise, Youth Strike 4 Climate Philippines in its Facebook page said that it should “stop harvesting sand from other places just to beautify this dirty bay.”

“There are so many issues we need to FOCUS ON like the pandemic response and yet here is our government, doing this stuff,” the environmental group said.

In January, the DENR reported that Manila Bay’s coliform levels “drastically decreased” a year after it launched its rehabilitation efforts project dubbed as “Battle for Manila Bay.”