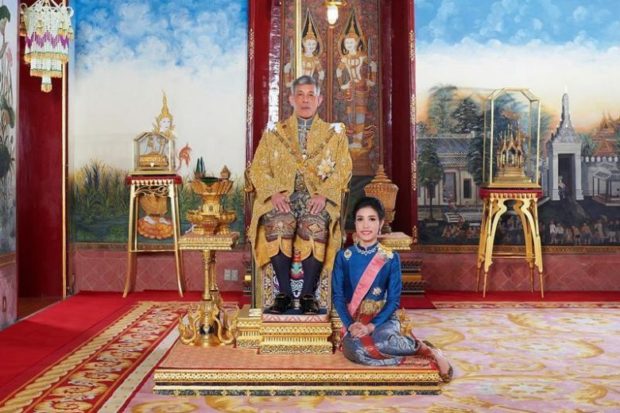 BANGKOK — Thailand’s King Maha Vajiralongkorn has reinstated Ms Sineenat Wongvajirapakdi to her post of royal noble consort, and returned her royal insignia and military ranks, the palace announced on the royal gazette on  Aug 29.

The 35-year-old had been stripped of all royal positions in October last year for failing to conform with codes of conduct and showing disloyalty to the King.

According to the 2019 announcement, Ms Sineenat had opposed the coronation of Queen Suthida and tried to influence the King to appoint her instead.

The statement published in the royal gazette on Aug 29 said Ms Sineenat  “is untainted” and therefore entitled to the royal noble consort title and all her previous posts within the palace.

“Therefore, the stripping of royal titles, official position in serving the crown in military capacity and military ranks and the recall of all declarations has never taken place,” the statement said.

The order is effective Aug 28.

Ms Sineenat had disappeared after her public disgrace last year and her whereabouts could not be confirmed. This week, Bild newspaper reported she had arrived in Germany, where the Thai king spends much of the year.

Before her dismissal, Ms Sineenat held the rank of major-general in the King’s royal bodyguard unit, where Queen Suthida was the deputy chief.

She has undergone military training and is also a qualified pilot.

She had graduated from the Royal Thai Army Nursing College and worked as a nurse from 2008 to 2012.

After that, she joined the Royal Household Bureau, working in the palace’s handicraft store.

In July last year, she was appointed royal noble consort.

The following month, the palace released her official biography and a series of candid photos, including one of her wearing a crop top while piloting a jet and another of her holding the King’s hand. The unprecedented photos caused a stir and Thailand’s palace website to crash.

King Vajiralongkorn married three times when he was the crown prince and has seven children – five sons and two daughters – from the marriages. Queen Suthida is his fourth wife. The royal couple have no children.