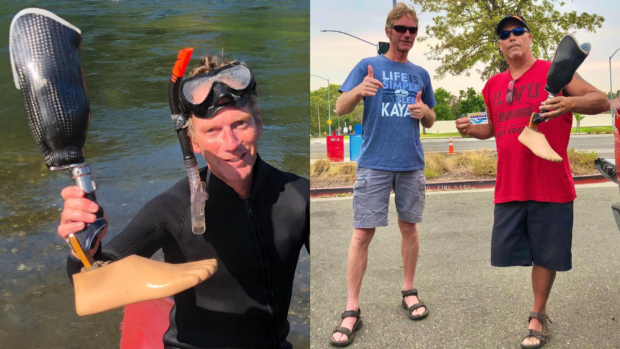 A diver reunited a man with his lost prosthetic leg after spotting it at the bottom of a river in California, USA.

Karl Bly was on one of his usual dives when he swam by the object in the American River on Aug. 17, as per CBS-affiliate KOVR on Monday, Aug. 31.

“Once I got past the foot that was on it, the human-looking foot, I saw the mechanics of it and realized it was a prosthetic leg and I just knew immediately somebody needed it back,” he told the news outlet.

Following his odd discovery, Bly took to his Facebook page, American River Lost & Found, to track down its owner.

PLEASE SHARE this post… I JUST FOUND THIS in the American River….Please help to find the owner by Sharing this…

His post eventually reached the prosthetic leg’s owner, Scott Anderson Sr., who met up with Bly the day after.

“Scott Anderson Sr. GOT HIS LEG BACK!!!” Bly proudly stated while thanking those who shared his post.

Bly explained that Anderson lost the prosthetic leg while he was rafting along the river before. After returning it, Bly recalled that Anderson was “very thankful” since he needed it to get back to work.

Scott Anderson Sr. GOT HIS LEG BACK!!! … Thank you to everyone who shared the post and helped to find him…. …

The diver’s effort also helped Anderson save money. According to the report, it would have cost nearly $15,000 (over P728,000) to replace the prosthetic leg.

While Bly has found numerous items such as cellphones from the river, he pointed out that the leg is the most expensive one he has spotted this year. Bly also advised those planning to visit the river to make sure that any valuable items they bring can float. Ryan Arcadio /ra