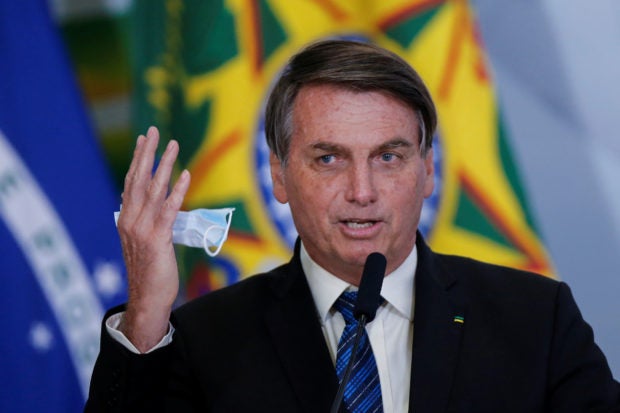 BRASILIA — Brazil’s President Jair Bolsonaro on Tuesday extended until the end of the year payments for low-income Brazilians hit by the economic fallout from the COVID-19 pandemic, a program that has boosted his popularity but created tension with his finance team.

The stipend, for poor and informal sector workers who have seen their earnings wrecked by the crisis, will be halved to 300 reais ($55.63) a month, Bolsonaro told reporters in the capital Brasilia.

Recent opinion polls show the payments have helped raise the right-wing president’s popularity, even in the poorer northeastern region of the country, once a stronghold of the left.

The program has also been widely credited with preventing a record economic slump from turning into a depression. Both the Bovespa stock market and the Brazilian real were up more than 2% on Tuesday.

Although figures on Tuesday showed Brazil’s economy shrank a record 9.7% in the second quarter, the slump is less than that suffered by other emerging economies like India, Chile and Mexico.

About 65 million Brazilians are receiving the stipend, which at the previous 600 reais was about one-fourth of the average income in Brazil.

Speaking in congress, Economy Minister Paulo Guedes said extending the stipends for four months will cost another 100 billion reais ($18.6 billion). So far it has cost the government 250 billion reais.

The cost of the program, which started in April, has led to friction between Bolsonaro and Guedes – who is trying to contain a record budget deficit.

But for many in Brazil it has become a lifeline.

In Lagoa da Prata, for example, a town in the central state of Minas Gerais, Pedro Carvalho, 24, used to sell makeup door to door, but his sales halted with the pandemic as nobody wanted to open their door.

“I am so grateful. It was really a blessing from God passed on by the president,” said Carvalho, who supports two children and his partner.

Bolsonaro’s popularity has risen to its highest since he took office in January 2019, despite the world’s second-largest coronavirus outbreak that has killed more than 120,000 people.

He now faces a juggling act, trying to maintain this newfound support while balancing Brazil’s books.

There remains huge uncertainty over what will happen at the end of the year. The government’s 2021 budget proposal on Monday made no provision for extra social welfare spending, but economists warn the scheme’s sudden end could have serious consequences for the economy next year.

The plan in some parts of government is to roll out a rebranded welfare program known as “Renda Brasil” to cushion the impact of ending the stipend. But Guedes said on Tuesday that Renda Brasil, which will replace the popular Bolsa Familia that cemented widespread support for the former leftist Workers’ Party government, is still under discussion.

Last week Bolsonaro rejected a proposal from Guedes that would have seen money from other social programs cut in order to fund Renda Brasil.

“I can’t take away from the poor to give to the poorer,” Bolsonaro said at the time.