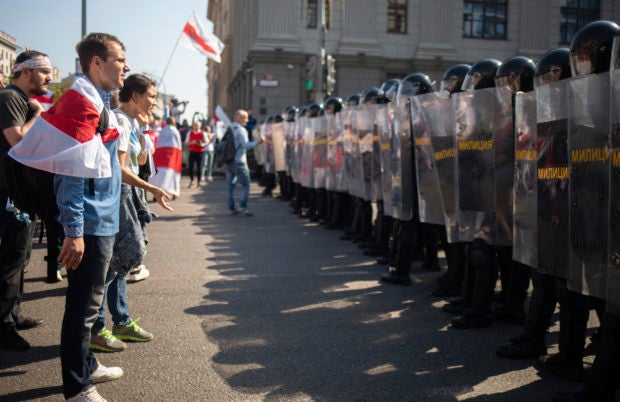 Belarusian opposition supporters stand in front of a police line during a rally in Minsk, Belarus, Sunday, Aug. 30, 2020. Tens of thousands of demonstrators have gathered in the capital of Belarus, beginning the fourth week of daily protests demanding that the country’s authoritarian president resign. The protests began after an Aug. 9 presidential election that protesters say was rigged and officials say gave President Alexander Lukashenko a sixth term in office. (Tut.By via AP)

KYIV, Ukraine — Belarus’ authorities on Monday detained the organizer of a strike at a top industrial plant, part of a methodical effort to stifle weeks of protests demanding the resignation of the country’s authoritarian leader of 26 years after an election the opposition denounced as being rigged.

President Alexander Lukashenko has dismissed the protesters as Western puppets and rejected the European Union’s offers of mediation. After a ferocious crackdown on demonstrators in the first days after the Aug. 9 vote that caused international outrage, his government has avoided large-scale violence against demonstrators and sought to end the protests with threats and the selective jailing of activists.

Anatoly Bokun, who leads the strike committee at Belaruskali, a huge potash factory in Soligorsk, was detained by police Monday and is facing a 15-day jail sentence on charges of organizing an unsanctioned protest. The factory, which accounts for a fifth of the world’s potash fertilizer output, is the nation’s top cash earner.

The Belaruskali strike committee spokesman, Gleb Sandras, said authorities had managed to halt a strike at the factory that began two weeks ago and all its potash mines are now working.

He said that agents of Belarus’ State Security Committee, which still goes by the Soviet-era name KGB, had pressured workers to end the labor action.

“KGB agents have inundated the factory, tracking down the most active workers and using various means of pressure,” Sandras told The Associated Press in a telephone interview. “The authorities have powerful economic instruments. They are blackmailing workers with mass dismissals.”

Strikes at Belaruskali and many other leading industrial plants have cast an unprecedented challenge to Lukashenko, who has kept the bulk of the economy in state hands and relied on blue-collar workers as his main support base.

Bokun’s detention follows the arrests of strike leaders at two other major industrial plants in Minsk last week. The organizer of a strike at the Grodno Azot, a major producer of nitrogen fertilizers, fled to neighboring Poland to escape detention.

Seeking to stem the protests, Belarusian prosecutors have opened a criminal probe against the opposition Coordination Council created to negotiate a transition of power, accusing its members of undermining the country’s security. Last week, Belarusian courts handed 10-day jail sentences to two council members and summoned several others for questioning, including Svetlana Alexievich, who won the 2015 Nobel Prize in literature.

The U.S. and the European Union have criticized the Aug. 9 election that extended Lukashenko’s rule as neither free nor fair and urged Belarusian authorities to engage in a dialogue with the opposition – calls the 66-year-old Belarusian leader has rejected. 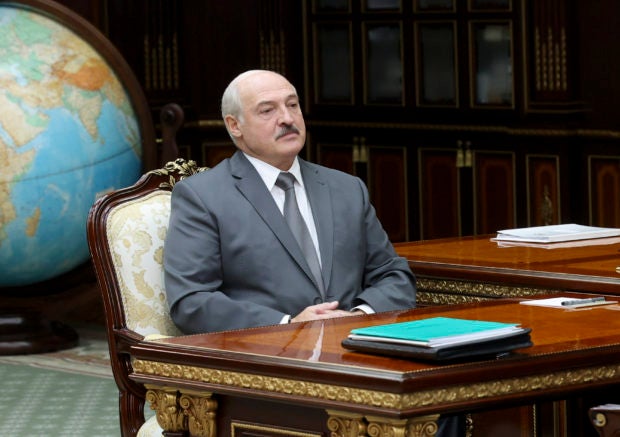 In a bid to win time and to assuage simmering discontent, Lukashenko touted the prospect of a vaguely-described constitutional reform that could see a new presidential election at an unspecified time. On Monday, he bluntly dismissed the opposition push for restoring the country’s earlier constitution, which envisaged broad parliamentary powers.

Following a fierce clampdown on peaceful demonstrators in the days after the vote that left nearly 7,000 people detained, hundreds injured by police rubber bullets, stun grenades, and beatings, and at least three protesters dead, police let the demonstrations go unhindered for the next two weeks, but last week again cranked up the pressure on demonstrators and began dispersing rallies.

The Belarusian Association of Journalists said over the weekend that accreditation rights were also taken away from 17 Belarusians working for several other media, including Germany’s ARD television, the BBC, Reuters, AFP, and U.S.-funded radio Free Europe/Radio Liberty said five of its journalists lost their accreditation.

The U.S. and the EU officials have strongly condemned the media crackdown.

The detention of hundreds of demonstrators last week didn’t deter the opposition from mounting another massive rally on Sunday, which saw an estimated 100,000 flood the streets of the Belarusian capital amid a heavy police presence.

German Chancellor Angela Merkel’s spokesman, Steffen Seibert, hailed the protesters’ courage and urged Lukashenko on Monday to “recognize the reality in the country – there needs to be an open dialogue between the leadership, opposition forces and all of Belarusian society to bring about a peaceful solution to this current crisis.”