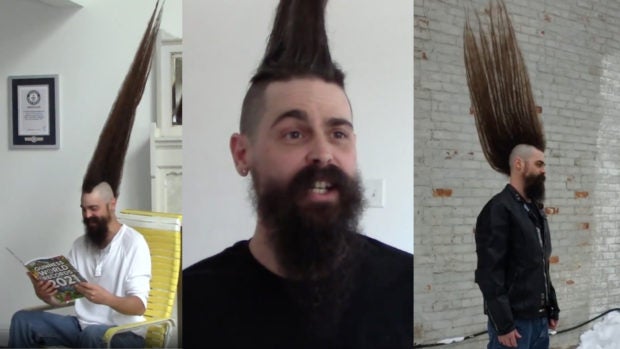 A man from Minnesota in the United States has just set a new record for the world’s tallest full mohawk in the Guinness World Records, which stands at 108.2 centimeters or 42.5 inches.

Joseph Grisamore said he felt “like a champion” to hold the title, as seen on Guinness World Records’ Instagram page today, Aug. 28.

It takes Grisamore around an hour to set up his mohawk, sometimes with the help of his wife or a hairdresser. In 2006, he attempted to take home the record for the world’s tallest spike mohawk, but did not succeed.

The Guinness title holder revealed he just let his hair grow out naturally. Grisamore has not shaved his hair since 2013 as he aimed to get the title for the world’s tallest full mohawk.

The man’s achievement will be included in the 2021 edition of the Guinness World Records book.

During this COVID-19 crisis, he works as a frontline worker at a healthcare facility in Minnesota.

Grisamore’s attempt to get the title took place on Sept. 20, 2019, in a local beauty salon in Park Rapids, according to the Guinness World Records website. To perfect his full mohawk hairdo, his hair was set up by a hairstylist, with the assistance of his wife, his mother and a can of hair spray.  /ra