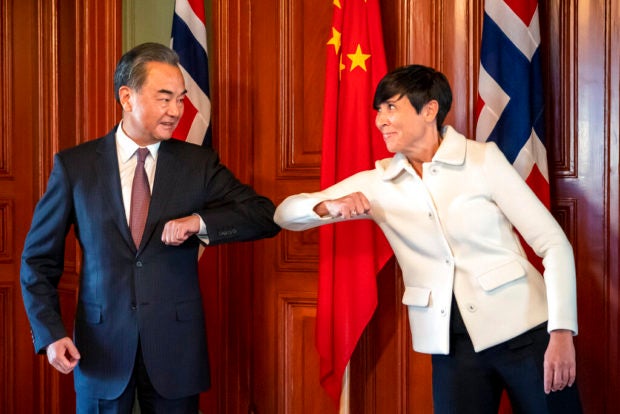 STOCKHOLM, Sweden  — Chinese Foreign Minister Wang Yi has called for multilateralism to be defended, warning Thursday during a visit to Norway that those principles are being challenged by “unilateralist and bullying acts.”

Wang’s visit to Norway is part of his five-nation tour of Europe this week that also includes Italy, France, Germany and the Netherlands. He said multilateralism concerns “the very survival of all countries, particularly medium- and smaller-sized countries.”

The visiting diplomat’s top agenda item in Europe was expected to be pushing Europeans to guarantee market access to telecom giant Huawei, and broader efforts to keep European countries quiet on Hong Kong and to take Beijing’s side in its tariff war with Washington.

Norway’s election as a member of the United Nations Security Council for the period 2021-2022 is seen as a main reason for Wang’s visit to the Scandinavian country. Wang said China wishes to see the U.N. play a central role in world affairs, and rejected protectionism and “power politics.”

Relations between China and Norway have significantly improved following a six-year standoff relating to Norway’s Nobel committee decision to awarded dissident Liu Xiaobo the peace prize in 2010, infuriating China. Although Norway’s government has no say over the Nobel panel’s choices, China suspended a bilateral trade deal and restricted imports of Norwegian salmon.

When asked how China would react if the Nobel peace prize was awarded to Hong Kong pro-democracy activists, Wang warned that his country would reject attempts to “politicize” the Nobel Peace Prize.