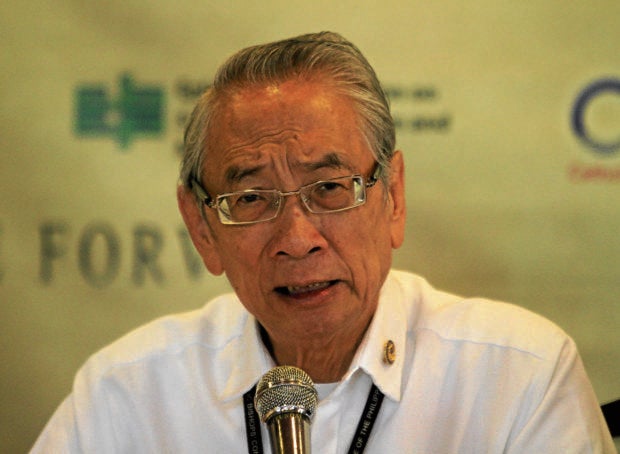 The mission of the Church, Archbishop Oscar V. Cruz said, “requires her to denounce political attitudes, behavior and structures that run counter to the Gospel and to the Reign of God or that militate against the common good and the integral salvation of the human person, especially of the poor.’’

Cruz wrote this in his “Catechism on the Church and politics’’ in 1998 when he was president of the Catholic Bishops’ Conference of the Philippines (CBCP), and it’s clear he lived by it as a leader of the Church that often found itself crossing swords with government officials.

An outspoken Church figure, he excoriated presidents, mounted a high-profile campaign against the illegal numbers game “jueteng,” and led investigations into the clergy’s sexual misconduct.

Cruz died of COVID-19 around 6:45 a.m. on Wednesday at Cardinal Santos Medical Center in San Juan City, according to Lingayen-Dagupan Archbishop Socrates Villegas. He was 85.
A bout with pneumonia weakened Cruz in 2018. He was taken to the hospital on Aug. 10, the CBCP said.

“The world is poorer by his passing away,’’ Villegas said. “Heaven has a new jewel. My tears flow. My heart is grateful that in this lifetime I met a great churchman like Archbishop Oscar V. Cruz.”

As CBCP president from 1995 to 1999, Cruz kept his ear close to the ground, issuing statements and pastoral letters on pressing issues, such as the expanded value-added tax, Mindanao peace process, Charter change, illegal drugs, 1998 elections, kidnappings in Mindanao, among others.

But his commentaries did not end when he left the CBCP presidency.

Cruz led rallies in Pangasinan against President Joseph Estrada, who was ousted by a revolt in January 2001 amid charges of inefficiency, incompetence and corruption.

He also spoke out against corruption, the prevalence of jueteng and the spate of extrajudicial killings during the Arroyo administration.

The archbishop did not spare President Benigno Aquino III, twitting him over the alleged participation of administration officials in jueteng operations and the controversial reproductive health (RH) bill that sought to promote contraception among poor Filipino families.

Cruz also did not flinch from President Duterte’s criticisms of the Church. He had vowed not to keep his mouth shut for as long as Mr. Duterte keeps “attacking” the Church.

“All of a sudden, here he comes again saying this and that. I don’t think that it’s also fair that I keep quiet, especially when he speaks against the Church,’’ the archbishop said in August 2016, two months into Mr. Duterte’s presidency.

But the prelate was known more for his campaign against illegal gambling, founding the People’s Crusade Against Jueteng in 2004.

In September 2010, a year after his retirement, Cruz identified Interior and Philippine National Police officials as recipients of monthly jueteng payoffs. Cruz later submitted to the Senate a list of alleged “jueteng” operators and jueteng payoff recipients, including a former governor.

He also sought reforms within the Church. In July 2017, he launched an investigation into the pedophilia case of a Taytay priest, who was arrested while bringing a 13-year-old girl to a motel in Marikina City.

He wrote many books, including “Gambling in the Republic” and “CBCP Guidelines on Sexual Abuse and Misconduct: A Critique, and Call of the Laity,” and wrote a blog, titled “Viewpoints,” for years.
Cruz was born on Nov. 17, 1934, in Balanga, Bataan province, and was ordained in 1962. In 1976, he was appointed auxiliary bishop of Manila and worked with Cardinal Jaime Sin until he was named archbishop of San Fernando in 1978.

In 1991, he was appointed archbishop of Lingayen-Dagupan, a post he served for 18 years.

—With reports from Yolanda Sotelo, ,Tonette Orejas and Inquirer Research