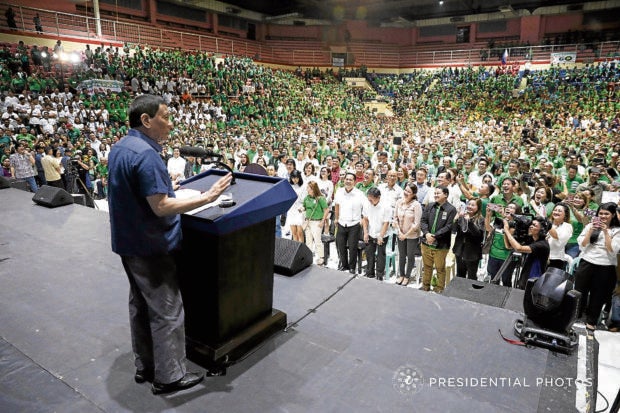 ONE OF MANY APPEARANCES A Malacañang press office photo shows President Duterte speaking at the convention of the Mayor Rodrigo Roa Duterte National Executive Coordinating Committee on March 21, 2018.

MANILA, Philippines — Philippine National Police chief Gen. Archie Gamboa has ordered the Criminal Investigation and Detection Group (CIDG) to investigate the proponents of the proposal to form a revolutionary government to be led by President Rodrigo Duterte.

“Political stunts such as this are ill-timed considering that we are in the midst of fighting the COVID-19 pandemic,” Gamboa said in a statement on Tuesday. “I have directed the CIDG to investigate the individuals behind it and to determine if there is any basis to file criminal charges.”

Gamboa earlier confirmed that he was among several government officials invited to meet with the Mayor Rodrigo Roa Duterte-National Executive Coordinating Committee (MRRD-NECC) about their proposal for a revolutionary government but, he stressed, the PNP had nothing to do with it.

“The information was then leaked to the media making it appear that we were involved, or worse, that we consented to it,” he said.

Security forces declared that they would not support any move to establish a revolutionary government even as other Duterte supporters rejected the idea and called for charges of inciting to sedition be filed against the proponents.

Justice Secretary Menardo Guevarra was among the ranking officials who rejected the proposal and said that “any complaint for inciting to sedition will be seriously investigated by the Department of Justice.”

The call for a revolutionary government was made by the People’s Coalition for a Revolutionary Government and Charter Change, which includes MRRD-­NECC, during a gathering in Clark, Pampanga, over the weekend.

The President himself, who previously threatened to declare a revolutionary government if his opponents tried to oust him, has also distanced himself from the call and denied knowing anyone from the group that made the call.

But netizens pointed out that the President cannot disavow knowledge of the group because he attended and gave a speech at a gathering organized by the MRRD-NECC in 2018.

Interior Undersecretary Epimaco Densing III admitted that while the President certainly knew some members of MRRD-­NECC, Duterte had no hand in the call of the group for a revolutionary government.

“He knows them. The chair of that [group] is former (Technical Education and Skills Development Authority) chief Gene Mamondiong so he knows them. Other members of the MRRD-NECC are from the Cabinet so he knows that group,” Densing told radio dzBB.

“However, let me make it clear that PRRD has no hand on the ‘rev gov’ call of that group. It was their own initiative,” Densing told the Inquirer in a text message.

No clear and present danger

But presidential spokesperson Harry Roque said that while the President might know some leaders of the MRRD-­NECC, Duterte has made it clear that he does not support the call for a revolutionary government.

“What is important is the President has said he is not in support of revolutionary government because obviously, his is a constitutional government,” he added.

“Whether or not it is inciting to sedition, it is really the realm of the police and the prosecutors, but from what I’ve seen, there is no clear and present danger,” Roque said in an interview over CNN Philippines.

The proposal, he said, was simply an advocacy that was “in no position really to threaten the existence of the republic.”