One double-page spread featured in the book by writer A Jia and illustrator Yu Rong. [Photo provided to China Daily]

BEIJING — A book about tennis legend Li Na could be titled Love Story, or maybe All Set and Done. Possibly even Life’s a Racket or Holding Court. The book’s title may pose a challenge but it is nothing compared to the text inside. It is not easy to condense the incredible life story of Li into a picture book. With two Grand Slam titles, Li is also the first player from an Asian country to win these titles and the first Chinese player to be seeded in a Grand Slam event.

At her height, she achieved a singles ranking of No 2. Li is the most successful Chinese tennis player of our age, and inspired many younger people to take up the sport. She was among the most popular tennis players on the circuit at that time, and was loved by Chinese tennis fans. She had an elegance and sense of humor that won over fans.

Li knows what sacrifices are involved in becoming a champion; the pain, the sweat, the hard work, the sore knees, the swollen ankles, the aching arms and the blisters.

So when writer-critic-translator A Jia (penname of Lin Xiaoxi) was offered the chance to write about her, he answered: “Would you please wait for me for two months? I need to do some research before making any decisions.”

The pitch came from the same book editor who contributed to the success of Li’s autobiography in the foreign book markets. Li Na: My Life, the English-language copy of her autobiography published by Penguin Books in 2013, was a star among China-centric books introduced to a global audience.

One double-page spread featured in the book by writer A Jia and illustrator Yu Rong. [Photo provided to China Daily]

Amazon readers have described the book as “emotional”, and one says: “Li succeeds in conveying the most salient and often humbling accounts of her journey to the top.”

“But remember that book has more than 200,000 words in its original Chinese version,” says Miao Hui, editor with Xiron Kids, who established connections with Li when publishing her 274-page autobiography back when she was an editor with Penguin.

Now the biographical picture book Li Na: Being a Better Me has been conceived to be 45 pages-including 22 double-page spreads.

“The major task for the creative team is to make choices about what to keep and what to leave out,” Miao says, adding that the team comprises artists from China and the United Kingdom.

Li personally oversaw the process of making what is probably the first biographic picture book about a living Chinese athlete, and her children are among the first group of readers.

The 38-year-old says she would like to inspire more readers to pursue their dreams, just as she did before retiring in 2014.

The first print run of 50,000 copies sold out soon after its release earlier this year.

“It’s a very true and touching book which made me revisit my early days. I’ll dedicate the picture book to my father,” Li says.

The father and daughter relationship is a key area of focus for A Jia, the book’s writer, who is himself a father to a daughter.

“After carefully reading her autobiography and all the relevant material, along with similar picture books about foreign athletes, and watching all of her matches, I interviewed Li and her mother,” A Jia says. “I decided to start the story with her father.” 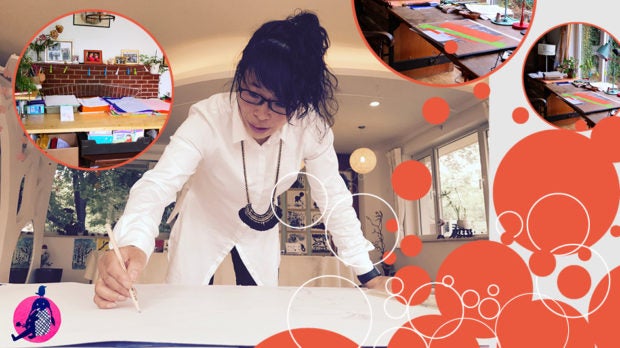 Beijing-based A Jia, 49, is a former law professional who graduated from Fudan University. He then taught and wrote on various topics, including preparing for the lawyers’ certificate tests, until 2001, when he was drawn into the world of picture books. This was due, he says, to the “bedtime story” routine with his newborn daughter. He read, translated and studied picture books, and made his name with his research and publications about picture books.

“Li Na’s father introduced her into the world of sport at the age of 4, dragging her jogging on the cold Wuhan winter mornings, all the way through to summer, something perhaps difficult for present-day parents to accept,” A Jia says.

Li was born in Wuhan, Hubei province. Her father, a former provincial badminton team player, wanted his daughter to be a national champion. So Li started badminton training at 5 years old, before turning her hand to tennis at age 8.

Li would go on to far exceed her father’s expectations. “But back then, her father only knew that his girl was gifted. What he did was to try to find ways to inspire and nourish the youngster with all he had,” A Jia says.

Her father died of a congenital vascular disease at the age of 39, when Li was just 14. One year after that, Li would claim her first national singles championship.

Their last meeting took place at a railway station in Wuhan, where, during her trip to Shenzhen from Beijing to attend a tournament, Li enjoyed a brief encounter with her ailing father on the platform for just several minutes. Li didn’t know the severity of her dad’s situation, and he promised her that he would soon be back on the sidelines cheering her on.

“In the picture book, the father is depicted as fading into transparency as the train pulls away and he waves Li off,” A Jia says, “which is heartbreaking and poetic.”

He says that, as a father, it is his favorite scene.

The book also offers food for thought to younger readers about growing up. It highlights that dreams must be nurtured and not discarded.

The picture book shows how young Li yearned to just watch TV while sipping iced drinks. Instead, she had to stay on court-perpetually running, serving aces and returning the ball with backhands and drop-shots.

“She told us calmly in the interview for the book that she doesn’t hate tennis that much, given how it changed her life,” he recalls, adding that Li doesn’t display much tennis-related memorabilia around her home, especially trophies and medals. “Maybe she would like to give her children more options.”

Inside the back cover, there is a selection of photos from Li’s childhood, a supplement to the pages of illustrations.

“Younger readers tend to love tales of heroes. Heroes are the ones who accomplish impossible feats, but they start out just like you and me,” he says.

Cambridge-based, Chinese-British illustrator Yu Rong feels closely attracted to, and connected with, Li’s story. “As a sports fan, also losing a loving father when I was young, the similar experiences inspired me while creating illustrations for the book,” Yu says in an email interview with China Daily.

The award-winning illustrator, known for her combined pencil-drawing and paper-cutting skills, chose to present Li’s story in a more abstract way.

“Readers will see batches of geometrical shapes and images in bright dynamic colors, and a tennis ball deconstructed into a circular shape or yellowish green color, both of which extended into every double-page spread,” Yu says.

She also links relatively realistic depictions of the Yellow Crane Tower from Li’s hometown to the Eiffel Tower in Paris where she won her first Grand Slam in 2011.

“Yu’s training (both in China and at the Royal College of Art in London), her cultural roots and artistic explorations suit Li’s story well. Both are Chinese-born and are influencers. I respect the way she expresses emotion and compassion,” A Jia says.

Read Next
Locsin to RevGov proponents: Just form a cheering squad outside Palace
EDITORS' PICK
Manila is 78th most expensive city in the world for foreign workers
TeaM Energy pushes development programs to help in pandemic rebound
Want to help local farmers? Shop small and eat Real Food
Piolo Pascual: The Ultimate Heartthrob continues to level up
ICC is everything but a court of ‘white people’
Garcia softens stance, meets IATF halfway on swab-upon-arrival policy
MOST READ
Sharon Cuneta on living in the US: ‘Nagagawa ko lahat ng normal na bagay’
ICC is everything but a court of ‘white people’
Duterte-Duterte tandem possible but ‘winnability is another question’ — Binay
More than 150,000 voters wiped off the registration list – Comelec
Don't miss out on the latest news and information.