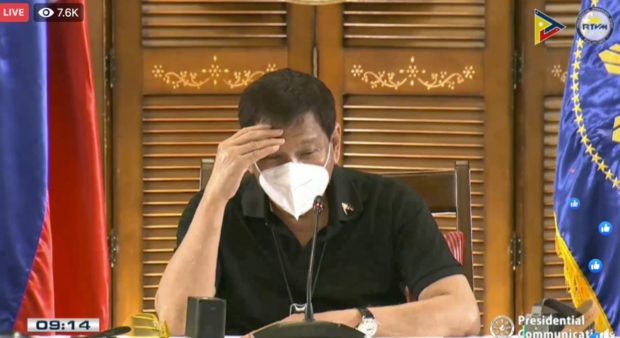 MANILA, Philippines — Malacañang on Wednesday allayed fears about President Rodrigo Duterte’s alleged deteriorating health, saying that the doctor’s advice to watch his diet due to his Barrett’s esophagus ailment “nearing stage one cancer” was given a “long time ago.”

In an interview over CNN Philippines’ The Source, presidential spokesperson Harry Roque said people are “putting too much meaning” on Duterte’s remarks about his health, adding that the 75-year-old president remains healthy.

“I think that advice was given to him a long time ago when the President was still drinking. He has since stopped drinking and as far as I know since he became president he has not resumed drinking,” Roque said.

“So you’re talking of a medical advice that happened many years ago, even prior to the presidency. And I think the reason why the President stopped drinking is to prevent it from developing into stage 1 cancer. That is the context of what the President said,” he added.

In a pre-recorded address aired on Tuesday morning, Duterte assured the public that he and the people within the Inter-Agency Task Force on Emerging Infectious Diseases (IATF) are not interested in pocketing government funds on COVID-19 response since they are already nearing retirement.

Duterte’s state of health has been a recurring issue in his presidency given his advanced age.

The President has admitted publicly that he has, among other things, Buerger’s disease and Barrett’s esophagus, and that had been experiencing occasional headaches and has spinal issues which he attributes to a motorcycle accident when he was 68 years old.

He has also revealed to taking sleeping pills and the highly addictive Fentanyl and to having myasthenia gravis–an autoimmune disease that destroys muscle receptors and can result in the drooping of eyelids, or overall weakness.

Under Section 12, Article 7 of the 1987 Constitution, the President is mandated to inform the public of his health condition in the case of serious illnesses.

But Roque said Duterte, being a lawyer, knows this and would inform the public if the need arises.