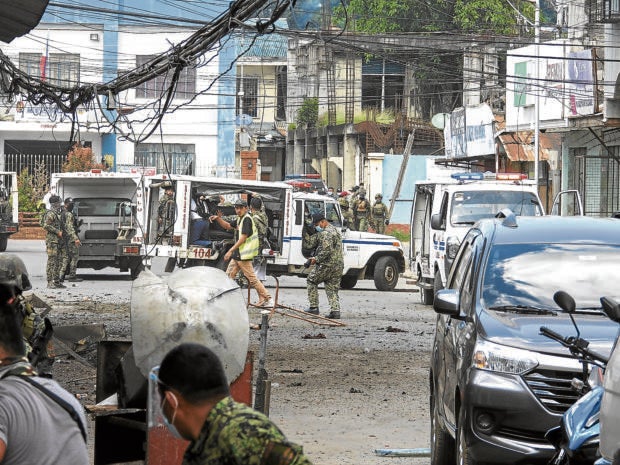 ZAMBOANGA CITY, Zamboanga del Sur, Philippines — The twin bombings that killed 15 people and wounded 75 on Monday in Jolo, Sulu province, were likely pulled off not by one but two suicide bombers believed to be supporters of the Islamic State (IS), according to authorities.

The IS has claimed responsibility for the explosions. Its supporters have been involved in several deadly bombings in Mindanao over the past few years.

SITE Intelligence, a US-based group that monitors online communications among Muslim militant groups, reported that the IS East Asia province had issued a statement claiming responsibility for the attacks.

SITE also cited IS supporters across the globe rejoicing over the casualties, a number of whom were soldiers and policemen, as result of the bombings.

Vice President Leni Robredo condemned the bomb attacks and called on the government to work toward bringing those accountable to justice.

“This attack is even more horrific in the context of the pandemic, when the imperative is to pull together to address the damage already wrought on our health, economy and way of life,” Robredo said in a statement.

The first bomb that went off before noon was first believed to have been planted in a motorcycle on Monday. Now, authorities said the bomb was not placed in the motorbike but exploded inside Paradise Food Shop, a restaurant and grocery store on Serrantes Street in Barangay Walled City.

An hour later, a second explosion came a hundred meters away at a branch of Development Bank of the Philippines, known locally as Goteckleng Building, when a soldier accosted a woman wearing a suspiciously swollen clothing.

Jolo Mayor Kherkar Tan also expressed doubts that the motorcycle had been rigged with improvised explosives because it did not explode and was still intact.

Besides, the mayor said he knew the owner of the motorcycle. “My suspicion is that, this (the first blast) was also (done by) a suicide bomber,” he said.

A military official, who asked not to be identified, said a bomb crater was seen inside the eatery, an indication that the explosion took place inside the food shop and not outside, where the motorcycle had been parked.

It took hours for a bomb expert and investigators to piece together all the debris and other fragments, including flesh and limbs, and reconstruct the first explosion that occurred at 11:54 a.m. on Aug. 24, according to Maj. Gen. Corleto Vinluan Jr., commander of Western Mindanao Command (Westmincom).

“The first explosive was not mounted on the motorcycle (as initially suspected),’’ Gonzales said. “That’s the result of the investigation of the explosives and ordnance division.’’

Gonzales said that while it was determined that the second bomber was female, the gender of the first bomber had not been ascertained as the body was practically obliterated by the blast.

“Our experts are having a difficult time determining (the gender),” he said.

Army chief Lt. Gen. Cirilito Sobejana, who was chief of the Westmincom, expressed certainty that the suicide bombers were the two women, apart from Abu Sayyaf bomb maker Mundi Sawadjaan.

Four Army intelligence men who were tracking down Sawadjaan were gunned down by Sulu policemen on June 29.

In an interview on Tuesday on radio dwIZ, Sobejana said the two women were likely the wives of Filipino suicide bomber Norman Lasuca and of Talha Jumsah, who went by the alias “Abu Talha” and acted as financial conduit and liaison of the IS to the Philippines.

Lasuca was killed on June last year when he detonated a body-strapped bomb at a 1st Brigade Combat Team camp in Sulu. The military identified him as the first Filipino suicide bomber. Talha died in November in a clash with government troops in the same province.

According to Sobejana, the women may have been motivated and convinced by Sawadjaan to continue their husbands’ roles in the Abu Sayyaf group.

Vinluan said the second blast somehow gave the military a clearer picture of the “suicide bomber,” one of the two women trained by Sawadjaan, the notorious bomb expert of the Abu Sayyaf Group, and whom he suspected to be behind the latest blasts.

Investigators recovered a woman’s head on the roof of a building, where the second blast occurred.

“Definitely, she is a Filipino woman,” Vinluan said.

But Rommel Banlaoi, head of the Philippine Institute for Peace, Violence and Terrorism Research, said the female bomber who died in the second blast could be Indonesian.

“We suspect the female bomber was the daughter of the suicide bomber who perpetrated the Jolo cathedral bombing last year,” Banlaoi told a local radio station.