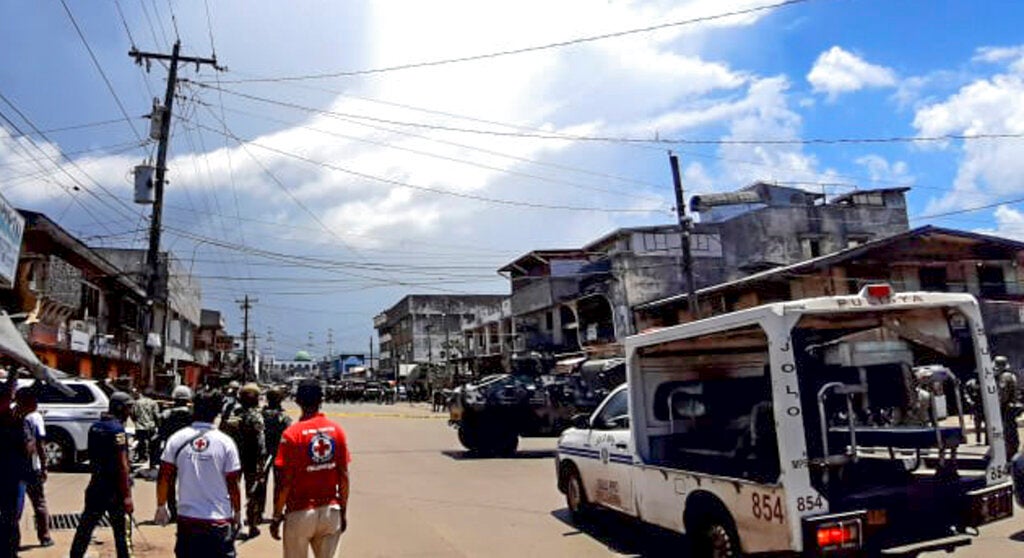 In this photo provided by the Philippine Red Cross, troopers secure an area after explosions struck the town of Jolo, Sulu province southern Philippines on Monday Aug. 24, 2020. Bombs exploded in a southern Philippine town Monday, killing several soldiers and wounding other military personnel and civilians despite extra tight security because of threats from Abu Sayyaf militants. (Philippine National Red Cross via AP)

MANILA, Philippines — Philippine National Police (PNP) has deployed more security forces to assist authorities in pursuit of operations in the explosions in Jolo, Sulu that occurred on Monday, Aug. 24.

“The Philippine National Police is mobilizing all available security forces in pursuit operations against persons responsible for the latest act of terrorism in Jolo, Sulu today,” PNP spokesman Brig. Gen. Bernard Banac said in a statement on Tuesday.

Data from the PNP recorded 14 people killed including one police personnel, seven military personnel, and six civilians in the bombings.

Meanwhile, 72 people, including six police personnel, 18 military personnel, and 48 civilians were injured in the blasts. They are undertaking treatment at nearby hospitals in Sulu.

In the same statement, Gamboa expressed sympathy to the family of fallen soldiers and policemen in the blasts.

“We join the entire Filipino nation in strong condemnation of this senseless act of terror for whatever motive its perpetrators may have even during this time of pandemic”, Gamboa said.

“While we express our heartfelt condolences to the bereaved family of the deceased and sympathy to the wounded, we assure them of our keen resolve and commitment to bring to justice those responsible for this vicious attack”, he added.

Reports from the military said the first explosion occurred at 11:54 a.m. inside a food shop in Barangay Walled City in Jolo, where a military truck was parked. After an hour, another explosion also occurred at the Goteckleng Building.