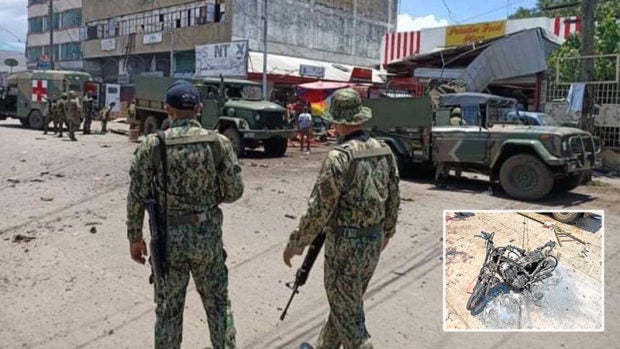 MANILA, Philippines — The first explosion from a bomb planted in a motorcycle rocked Jolo, Sulu province, just before noon on Monday. An hour later, a second blast came a hundred meters away, when a soldier accosted a woman wearing suspiciously swollen clothing, according to authorities.

Fifteen people — seven soldiers, six civilians, one policeman and the “suicide bomber” — were killed and 75 were wounded in the two explosions.

“Flesh, bones were scattered on the streets, mostly uniformed personnel,” said an owner of the pharmacy on Serrantes Street in Jolo. She preferred not to be named for safety reasons.

“I guess they [belong to the Philippine] Army. There were Badjao vendors and children on that street. There were food stall vendors, too,” she said. “We are really afraid.”

Malacañang denounced the bombings “in the strongest possible terms.”

“We likewise condole with the families and loved ones of those who died in these tragic incidents,” President Duterte’s spokesperson, Harry Roque, said in a statement.

Maj. Gen. Corleto Vinluan Jr., the newly installed chief of the Western Mindanao Command (Westmincom), said the mastermind of the two blasts was the same person who got away from pursuing four Army intelligence officers in Jolo before they were gunned down on June 29 by policemen near the police station at Barangay Walled City in Jolo.

The military men, all from the 9th Intelligence Service Unit of the Army’s 11th Infantry Division, were going after the bomb maker and two suicide bombers when they were shot and killed, according to Vinluan. They were Maj. Marvin Indammog, Capt. Irwin Managuelod, Cpl. Abdal Asula and Sgt. Jaime Velasco.

“Their target was the suicide bombers, plus Mundi Sawadjaan,” Vinluan said. He described the bomb maker as an Abu Sayyaf leader.

Westmincom lost track of Sawadjaan and his group when the Army intelligence men were killed, Vinluan said.

Had Sawadjaan and the two bombers been captured, Monday’s twin blasts probably would not have happened, he said.

“It was a deafening sound,” the pharmacy owner described the first blast that rocked Barangay Walled City.

“We immediately closed our shop. Upon reaching home, the ground shook [when] another explosion [occurred], just near the first one,” she said.

The first bomb exploded at 11:54 a.m. beside Paradise Food Shop, a restaurant and grocery store.

Police found nearby an almost charred motorbike, which was reportedly rigged with an improvised bomb. Parked near it and near the eatery was the KM450 military truck.

“The other (police and soldiers) were roving the streets, while some of them were buying operational consumption, when the first blast occurred,” said Lt. Col. Ronaldo Mateo, spokesperson for the 11th Infantry Division.

An hour later at 12:57 p.m., the second bomb blew up at a branch of Development Bank of the Philippines, known locally as Goteckleng Building.

Mateo said six soldiers died from the first blast and another from the second one.

One of the soldiers standing near the Goteckleng Building was about to inspect a woman whose clothing appeared bloated when the second blast went off.

“He [was asking] the woman when she suddenly went off, killing [herself and] the soldier [near her]. Six police personnel, who were in the vicinity, were wounded,” Mateo said.

According to Vinluan, Sawadjaan could be responsible for the blasts as “he is the only one capable of executing such attacks.”

The Abu Sayyaf leader, he said, was also behind last year’s suicide bombing in the Jolo Cathedral and the attack on a camp of the 1st Brigade Combat Team.

The target of Monday’s blasts was only a few meters away from Our Lady of Mount Carmel cathedral that was bombed in January last year, killing 23 people and wounded 102. Among the fatalities were two Indonesians whom the military claimed were suicide bombers.

Vinluan said his intelligence officers had been after Sawadjaan since May in Sulu, a known stronghold of the Abu Sayyaf, a terrorist group that has allied itself with the Islamic State.

The Westmincom chief has directed his men to hunt down Sawadjaan, and cordon off and secure the places where the blasts took place.

The entire Jolo has been placed under lockdown.

“No one gets in, no one gets out,” Mateo said. “Security operation is ongoing. Hopefully we can catch the bombers.”

Sen. Richard Gordon, chair of the Philippine Red Cross, said his group had already coordinated with the local government and prepositioned blood supply for possible use. “All nearby Red Cross chapters are already activated and on full alert,’’ he said.

—With reports from Jeoffrey Maitem and Julie M. Aurelio