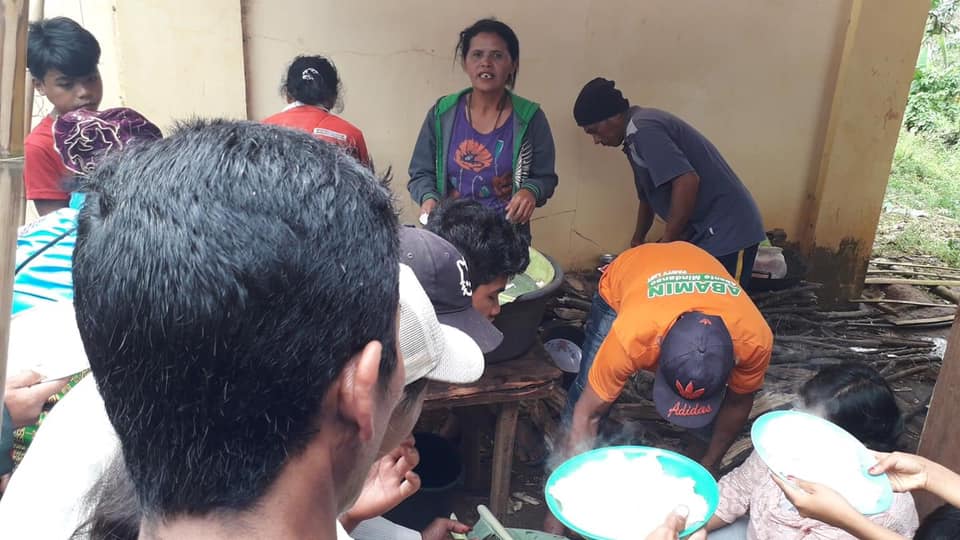 In this file photo, slain Manobo leader Merlinda Ansabu Celis (middle, facing camera) attends to food preparation during one of the indigenous people’s activities in their community in Cotabato. PHOTO FROM LUMADNONG PANAGHIUSA FARMERS’ ASSOCIATION OF MAGPET

COTABATO CITY–A Manobo woman in Magpet town, Cotabato province was attacked by four men while she was on her way to her farm at the village of Mahongkog in the town past 2 p.m. on Sunday (Aug. 23), according to police.

Merlin Ansabu Celis, 50, a resident of Magpet, was walking with her daughter and was on her way to her farm when she was shot from behind by one of the four men. As she fell, another assailant finished her off using a machete.

Her daughter managed to run and sought help in houses nearby.

Bae Leah Aurena-Labrador, provincial executive assistant on Indigenous Peoples in Cotabato province, said Celis had been actively advocating for the protection of indigenous peoples’ (IP) culture and ancestral domain at her village in the face of continued illegal logging.

No one has claimed responsibility for the attack but Cotabato Gov. Nancy Catamco condemned the murder.

“This act may instill fear among our IP sisters and brothers whose only desire is to live in our ancestral domain, according to our culture and tradition,” said Catamco, a member of Manobo Dulangan tribe, in a statement.

“I condemn this incident,” she added. “It must stop as I speak. Otherwise, it will continue to destroy civilian and IP lives.”

Catamco called on police to investigate and to leave no stone unturned.

“Whoever has the evil mind to commit such crime on a helpless and defenseless woman should be brought before the bar of justice,” the governor said.

She urged the tribe to remain strong and assured the victim’s family the government would not abandon them.

Soldiers of the 72nd Infantry Battalion are on the hunt for the assailants.

Read Next
Robredo hits rudderless leadership amid pandemic in unleashing stinging criticism of gov’t
EDITORS' PICK
Nestlé Philippines’ ‘NESCAFÉ Plan’ bags Grand Anvil at PRSP 56th Anvil Awards
Smart reinforces superiority with best speed and mobile video experience in PH
Every Filipino home can now be a smart home with realme TechLife
New 3,045 COVID-19 cases push PH total active cases to 40,074
LTO’s P500-M deal for screws draws scrutiny
How to lose a PH genius: Wesley So officially a US citizen
MOST READ
How to lose a Filipino genius: Wesley So officially a US citizen
US lays out list of aid to ‘satisfy’ Duterte following VFA payment demand
Robredo on Sara Duterte leading poll surveys: Why are Filipinos drawn to leadership of this kind?
Rights lawyer survives attack by playing dead, loses all case files
Don't miss out on the latest news and information.