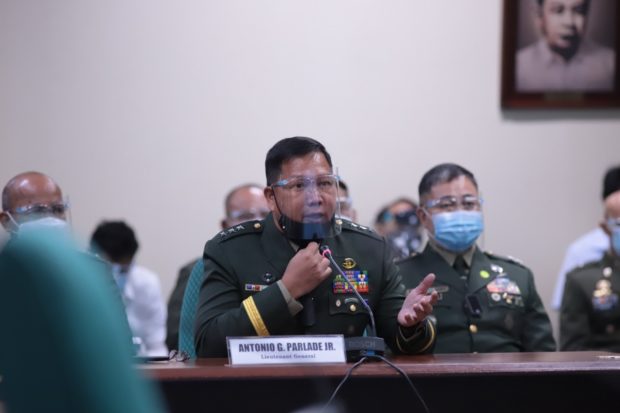 In a confirmation hearing of a panel of the Commission on Appointments (CA), Senator Risa Hontiveros asked Parlade about accusations against him that he had linked to the “communist underground,” potentially endangering them.

“Doesn’t it violate military rules, for example on the conduct of officers and gentlemen, general?” the senator said.

In response, Parlade said the military should be able to understand political dynamics to “be able to engage in a healthy political discourse.”

“Let me just say that your Armed Forces should be political, but should be non-partisan,” he said.

Parlade then accused the Communist Party of the Philippines (CPP) of playing “dual tactics in order to destroy our institution including the legislative, including other institutions, judicial, especially, the executive.”

Further he said it is the duty of the AFP to inform the people of such activities of these organizations.

“It’s now time for us to speak out, especially now that there’s an Anti-Terror Act that defines the activities of terrorists from activists,” he said.

“Activism per se is welcome. We want that in a robust democratic country like us, but to be violent, in such a way we will be hurting other people and you’ll destroy your country is a different matter,” Parlade added.

The military official then denied having red-tagged individuals despite facing two separate complaints for alleged red-tagging.

“We are getting this information about their participation in terrorist activities from their colleagues who are now working with us, former rebels, and even top officials of the Communist Party of the Philippines, they are the ones informing us of their participation, specific participation of these individuals as far as terrorism is concerned,” he added.

“I did not tag, specifically, any individual as a communist unless I am very certain. The rest of them, I tagged because I am sure. But as far as Ressa is concerned, wala akong sinabi [I did not say anything],” he said.

“I never said that Glenda Gloria was a communist,” he added, referring to Rappler’s managing editor.

“I was just saying that her line is way off, that her comments cannot be accepted by the Armed Forces,” he further said.

Last July, Bayan Muna Rep. Carlos Zarate filed a complaint against Parlade before the Office of the Ombudsman over the latter’s alleged red-tagging and partisan political activity.

Zarate had asked the Office of the Ombudsman to suspend Parlade pending the investigation.

Before ending her line of questioning, Hontiveros defended the groups earlier mentioned by Parlade.

“Though I have my own long-standing serious political differences and debates with them, the last time I checked, they were still recognized as legal and above ground organizations and they are not here in our hearing in order to speak for themselves,” she said.

The senator also reminded the military that while individual members AFP have the right to their own political beliefs as Filipino citizens, they should remember that the AFP “as an institution cannot be political in the same sense as civilians.”

“The Constitution gives our kababayans [countrymen] in the Armed Forces and the  national police the exclusive right to bear arms in defense of the country and the government,” Hontiveros said.

Read Next
Manobo woman, logging foe, killed in Cotabato town
EDITORS' PICK
Alex Eala wins Grand Slam on Independence Day: ‘I hope I made my contribution to the country’
Kai Sotto continues to inspire Filipinos by sharing his passions and stories with Smart Prepaid
Ahead of ONE: Full Blast II, Mongkolpetch warns Elias Mahmoudi: ‘Watch out for my fists’
G7 rivals China with grand infrastructure plan
PNP, PDEA destroy P25.8M worth of marijuana in Kalinga
Rare earth metals at the heart of China’s rivalry with US, Europe
MOST READ
Groups slam Duterte ‘surrender’ to China
PH logs 7,302 new COVID-19 cases — DOH
1Sambayan names 6 choices to pit vs Duterte’s anointed in 2022
MVP steps into new role as top PLDT cheerleader
Don't miss out on the latest news and information.