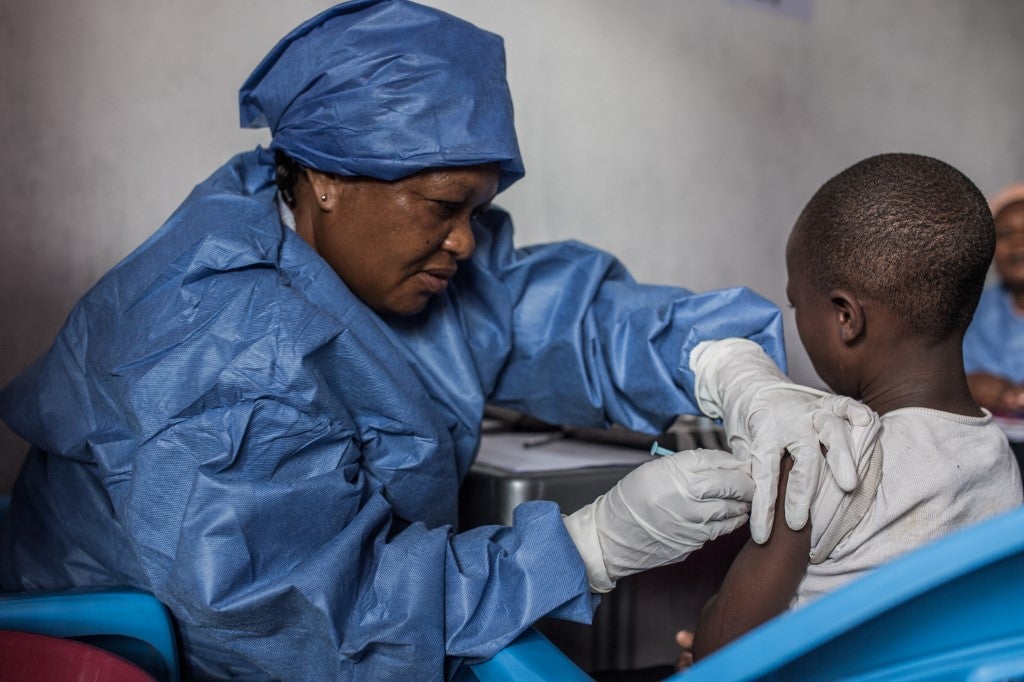 FILE — A girl is getting inoculated with an Ebola vaccine on November 22, 2019 in Goma. (Photo by PAMELA TULIZO / AFP)

One hundred cases of Ebola have been recorded in DR Congo’s northwest in less than three months, the World Health Organization (WHO) said Thursday as it warned the response to the epidemic is underfunded.

The outbreak was reported in Equateur province on June 1, just as the country was preparing to declare an end to a separate Ebola epidemic in the east that claimed over 2,000 lives.

The latest outbreak — the vast central African country’s 11th since Ebola was identified in 1976 — has since spread to 11 of the province’s 17 health zones, and 43 people have died, according to WHO.

The number of cases has doubled over the past five weeks, it said.

“With 100 Ebola cases in less than 100 days, the outbreak in Equateur Province is evolving in a concerning way,” said Matshidiso Moeti, WHO’s regional director for Africa.

“Without extra support the teams on the ground will find it harder to get ahead of the virus,” Moeti said.

WHO Director General Tedros Adhanom Ghebreyesus voiced concern about delays between the onset of symptoms and an alert for a suspected case of Ebola, which he said was five days.

“This is concerning, because the longer a patient goes without treatment, the lower their chances of survival, and the longer the virus can spread unseen in communities,” he said at a press conference in Geneva.

“The situation has been further complicated by a strike by health workers, which is affecting activities including vaccination and safe burials,” he said.

In early August, Ebola health workers went on strike to demand payment of their salaries.

“DRC has the best-trained workforce in the world for Ebola. This situation needs to be resolved as quickly as possible,” he said.

‘Ignore at our peril’

According to WHO, DR Congo’s health ministry has presented a plan to donors and partners requiring $40 million (34 million euros) in the fight against Ebola, and has committed $4 million.

WHO said it has already mobilized a total of $2.3 million to combat the epidemic.

“COVID-19 is not the only emergency needing robust support. As we know from our recent history we ignore Ebola at our peril,” Moeti warned.

On June 25, DR Congo officially declared an end to an Ebola epidemic that broke out in the east nearly two years earlier, which Health Minister Eteni Longondo described as “the longest, most complex and deadliest” in the country’s history.

The two epidemics have no common viral strain, according to WHO.

The virus is passed on by contact with the blood, body fluids, secretions or organs of an infected or recently deceased person.

The death rate is typically high, ranging up to 90 percent in some outbreaks, according to the WHO.

In May 2018, another Ebola epidemic in Equateur province was contained in less than three months, with 54 cases and 33 deaths recorded.

DR Congo has also faced a major measles outbreak and recurring flare-ups of cholera and malaria.

The country has recorded 9,802 cases of coronavirus and 248 deaths since the first cases were reported on March 10, according to the latest official figures.