’80s students thought Ninoy ‘just another trapo’ – until he returned

Like many other college students in the 1980s, Ateneo de Manila University alumna and Kickstart president Minette Navarrete was then just beginning to understand the political issues swirling around the Marcos dictatorship.

“During that time, we had books published under martial law saying, for example, that we needed to stay away from communists,” said Navarrete, who was then a management engineering major.

“But in the Ateneo, we learned how [people] experienced martial law and how they were impacted by human rights violations,” she said.

Navarrete recalled that when former senator Benigno “Ninoy” Aquino Jr. emerged as a staunch critic of the dictatorship, she and other students thought he was “just another traditional politician” or “trapo.”

“Every politician had said something to that effect: that they would die for the country, … and so on. But [Ninoy] came back. I started to ask more questions,” said Navarette.

Aquino was a political prisoner of the dictatorship who was jailed for seven years and seven months, mostly in solitary confinement, in his motherland before spending three years in exile in the United States.

He was assassinated on Aug. 21, 1983, upon his arrival at the Manila International Airport, which now bears his name.

Like Navarrete, Ateneo alumni and students on Friday commemorated the 37th anniversary of Aquino’s murder through an online Mass and an online “kwentuhan”—storytelling—in which they looked back on events leading to that fateful day.

Sen. Risa Hontiveros was then a social sciences student.

“I was 17 then and a freshman, and the issues of the day were the Education Act of 1981, the nuclear disarmament of the United States. And those were somehow related to [Aug. 21],” she said.

The day of Aquino’s arrival, Hontiveros chose not to join her fellow student leaders at the airport to greet him.

“In my ignorance about him, I didn’t know what he went through. I thought he was just another trapo,” she said. “This intersected with what was happening in my household. I had middle-class parents who voted for [Ferdinand] Marcos thinking he was an alternative, and the people started to change their [mindset] in 1969. When [Marcos] declared martial law, we were all in solid opposition against him.” 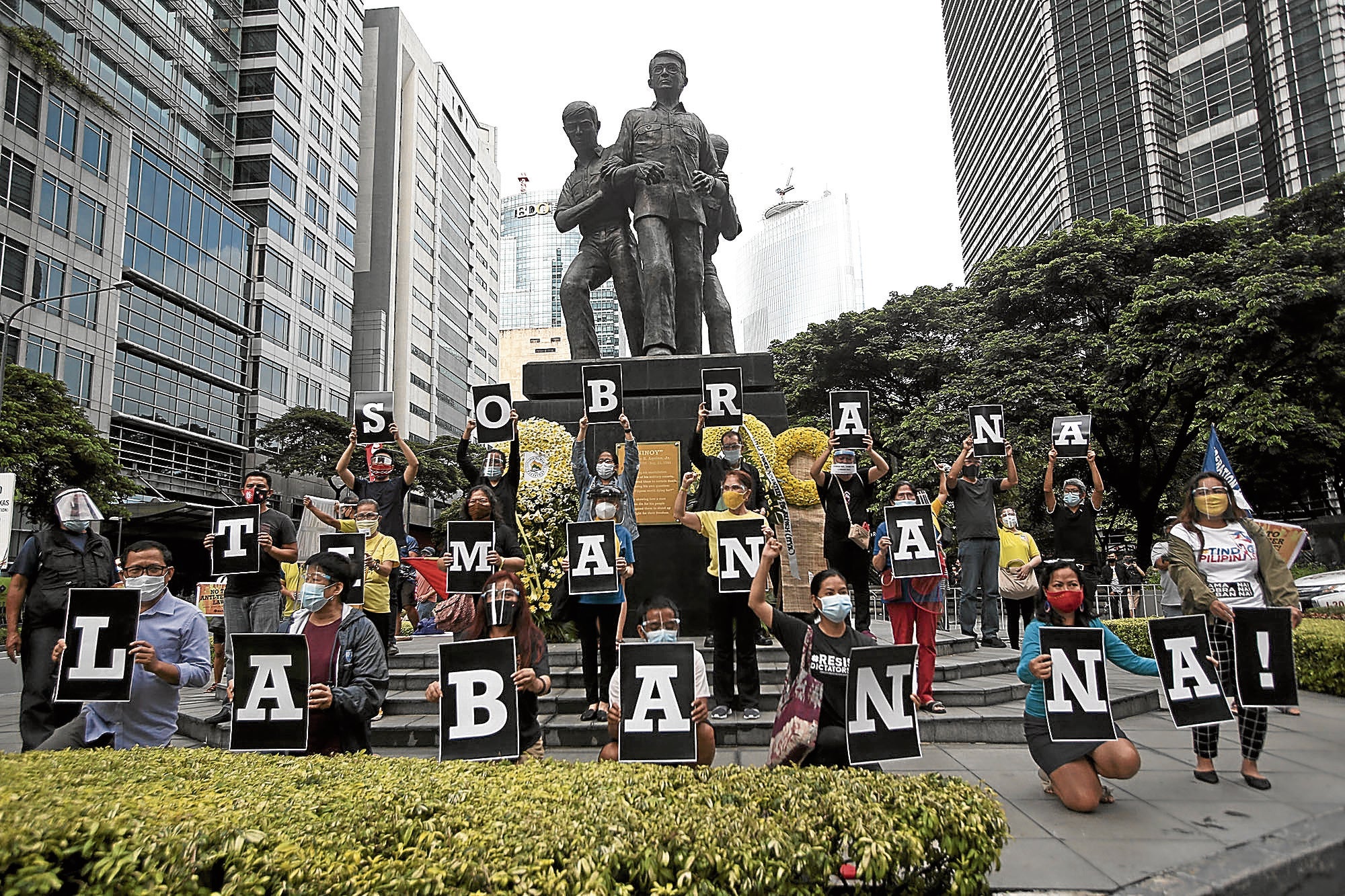 ‘ENOUGH!’ A protest rally held by the August Twenty-One Movement, Tindig Pilipinas and Movement Against the Anti-Terrorism Act of 2020 marks the 37th anniversary of Benigno Aquino Jr.’s martyrdom at the Makati central business district on Friday. —RICHARD A. REYES

Aug. 21, 1983, also holds a special place in the memory of journalist and Inquirer columnist John Nery, who was marking his 20th birthday then.

He had decided to take a nap after his birthday lunch instead of joining student groups at the airport.

“I decided not to go because I wasn’t very sure about him at that time. I thought he was another traditional politician—certainly worth listening to, but I won’t spend my birthday at the airport,” recalled Nery. “[Then] my younger sister woke me up to say something happened to Ninoy Aquino.”

Thereafter, Nery said, he was prompted to learn more about Aquino, as his own political awakening began with the arrest of then Cagayan de Oro Mayor Aquilino “Nene” Pimentel Jr. in 1981 on “obviously trumped up charges.”

“When there were rallies, people played contraband tapes of [Aquino’s] speeches …” Nery said.

“I realized he was a very different person in 1983 from when he was arrested in 1973. The years in between were what made him a true Filipino. It was those 10 years that transformed him,” added Nery.

At the Mass for Hope and Healing officiated by Fr. Albert Alejo, SJ, the priest read excerpts of Aquino’s letter to his son Benigno “Noynoy” Aquino III, who would become president in 2010.

Aquino was accused of rebellion in 1973, but he chose not to defend himself in the dictator’s court.

Alejo quoted Aquino in his letter to his son: “The only advice I can give you is this: Live with honor and follow your conscience. There is no greater nation on earth than our motherland.”

Said Alejo: “I think Ninoy was echoing Jesus in advising [his son] to develop this capacity to have a dedicated heart, the capacity to offer one’s self.”

Dutertismo and the war on drugs