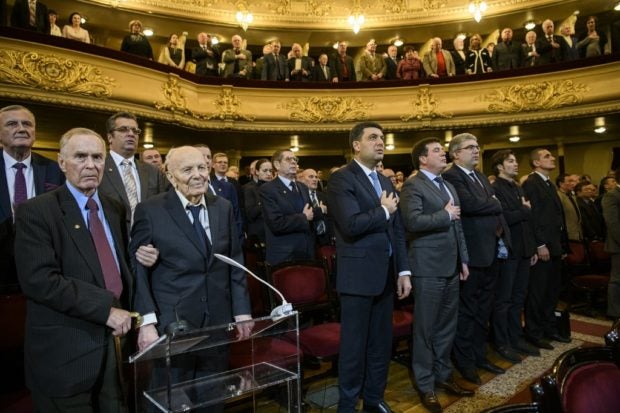 Borys Paton (4th L), the head of the Ukrainian Academy of Sciences, attends a festive event marking the academy’s 100th anniversary at the National Opera in Kiev on December 7, 2018. – Ukrainians on August 20, 2020 mourned the death of one of the country’s most famous scientists, Borys Paton, who pioneered the use of welding equipment in space during the 1960s. (Photo by Vladyslav MUSIENKO / AFP)

Kiev, Ukraine — Ukrainians on Thursday mourned the death of one of the country’s most famous scientists, Borys Paton, who pioneered the use of welding equipment in space during the 1960s.

Paton, who died on Wednesday aged 101, was responsible for more than 400 inventions, according to Prime Minister Denys Shmygal.

They included the world’s first space-welding device, but his institute also created equipment for electric welding of living tissue that has reportedly been used in more than 80,000 operations in Russia and Ukraine.

He was a “genius” and a “legend”, President Volodymyr Zelensky said in a statement shortly after Paton’s death was announced, adding that he had been the first person awarded the country’s highest civilian honor, the Hero of Ukraine.

The Education Ministry dubbed Paton the “father of welding”.

Paton was born in Kiev in 1918 to Yevgen Paton, a prominent engineer, and studied engineering at the Kiev Polytechnic Institute.

From 1953, he chaired the Paton Institute of Electric Welding, named after his father. In 1962, was elected the head of the Ukrainian Academy of Sciences – serving in the role until his death.

In 1982, a small bronze monument to Paton was unveiled in central Kiev.

Paton had opposed the construction of the Chernobyl nuclear power plant, arguing that it was too close to Kiev.

He died from cardiac arrest after he was hospitalized earlier this month, according to local media.