Limasawa, not Butuan, affirmed as site of first Mass in PH 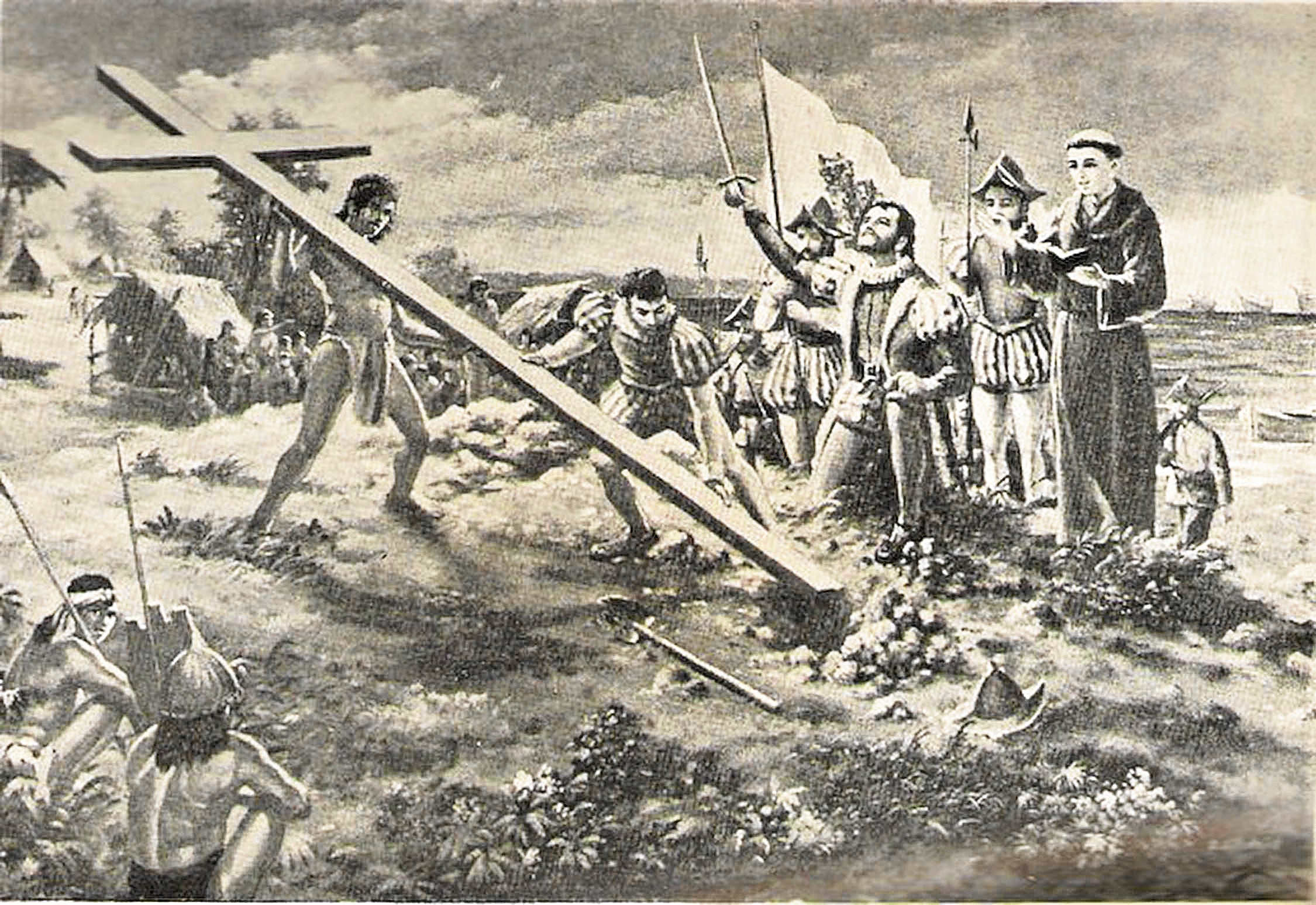 CHRISTIANITY TAKING ROOT An artist’s rendition of the first Mass in the Philippines, from the book “The Encounter” by Fr. Jose Vicente Braganza, depicts the planting of the cross on Limasawa Island on March 31, 1521.
—CONTRIBUTED PHOTO

CEBU CITY — Eight months before the 500th anniversary of the “first” Mass in the country, the National Historical Commission of the Philippines (NHCP) has determined that Portuguese explorer Ferdinand Magellan and his Spanish contingent held the event in Limasawa town, Southern Leyte.

The NHCP adopted the recommendation of a panel of experts reaffirming earlier findings that the 1521 Easter Sunday Mass was celebrated in Limasawa and not in Butuan, as claimed by some historians.

“The panel unanimously agreed that the evidence and arguments presented by the pro-Butuan advocates are not sufficient and convincing enough to warrant the repeal or reversal of the ruling on the case by the NHI (National Historical Institute),” NHCP chair Rene Escalante said in a statement released on Wednesday.

The body made its decision on July 15.

The issue of the exact location of the historic Mass was earlier resolved by the NHI, the forerunner of the NHCP, through two panels of experts: the first led by former Supreme Court Justice Emilio Gancayco in 1995 and the second by historian Benito Legarda in 2008. Both panels ruled that the site of the 1521 Easter Sunday Mass was Limasawa Island.

The panel reassessed the studies and literature on the matter, gathered the extant copies of Antonio Pigafetta’s chronicles and other accounts abroad, surveyed the presumed sites of the event in Butuan and Limasawa, consulted experts in geology and cartography, and submitted its report for review by the history departments of various Philippine universities.

Per Pigafetta, chronicler of the Magellan Expedition, the Easter Sunday Mass that expedition chaplain Fr. Pedro Valderama celebrated on March 31, 1521, happened in a place he identified as Mazaua.

Gift to the people

Limasawa Mayor Melchor Petracorta said he and his constituents were very happy that the NHCP stood by history and were hopeful that its decision would “settle longtime disputes on the issue.”

The ruling was made about a week before Limasawa marks its 37th founding anniversary on Aug. 27, Petracorta told the Inquirer. “It’s really a gift to the people of Limasawa. Actually, it’s a victory not only of Limasawa but of the entire Eastern Visayas,” he said.

The Diocese of Maasin, which has jurisdiction over Limasawa, was also overjoyed by the NHCP’s decision.

Fr. Johnrey Sibi, head of the Limasawa Commission, said everyone was now “inspired to work hard” for the celebration of the 500th anniversary of the first Mass in March 2021.

IT’S SETTLED A panel of experts has affirmed earlier records that the March 31, 1521, Easter Sunday Mass held by Portuguese explorer Ferdinand Magellan and his Spanish contingent took place in Limasawa town, Southern Leyte, where a shrine nowstands to commemorate the event. It found as ‘’not sufficient and convincing enough’’ evidence and arguments claiming that the Mass happened in Butuan. —PHOTOS BY DANNY PETILLA/CONTRIBUTOR

Local historian Rolando Borrinaga, who had researched on and represented Limasawa before the panel of experts and the NHCP, considered the decision “sweet vindication.”

In its report, the panel and the NHCP endorsed Borrinaga’s claim that the historic Mass was held in Barangay Triana, and not in Barangay Magallanes. They said Saub Point in Triana should likewise be recognized as the site of the cross planted by Magellan and his men.

Through official correspondences with various foreign institutions, the NQC obtained a high-resolution digital copy of the Pigafetta manuscripts, including the French version (Nancy Codex) currently kept in Yale University’s Beinecke Rare Book and Manuscript Library; the Italian version in the Veneranda Biblioteca Ambrosiana (Ambrosiana Codex) in Milan, Italy; and the two French versions in the Bibliothèque Nationale de France.

It also secured from the Edward Ayer Collection at Newberry Library in Chicago the transcriptions and notes made by American scholar James Alexander Robertson, who translated Pigafetta’s manuscripts into English in 1906. The panel likewise obtained and consulted the accounts of other survivors of the Magellan expedition, like Gines de Mafra, Francisco Albo, and the “Genoese Pilot.”

Pigafetta’s eyewitness account is the most detailed and only surviving account of the first Mass in the Philippines. But there are different interpretations of his account on where it was held.

Historian Gabriel Atega said Butuan had long been considered the site of the Mass. He argued that the shift from Butuan to Limasawa occurred after the publication of Robertson’s notes.

Atega said Robertson’s translation of Pigafetta’s manuscripts into English was based on the “garbled” Italian text of the Ambrosiana Codex that Carlo Amoretti, prefect and conservator of the Biblioteca Ambrosiana, transcribed and published in 1800.

He said the Ambrosiana Codex was “heavily edited and full of inaccuracies” and, vis-à-vis Robertson’s translation, should not be used as the basis for determining the nautical coordinates of the Magellan expedition.

Instead, he encouraged the panel to use the Nancy Codex, of which a translation by English scholar Raleigh Ashlin Skelton was published in 1969.

But according to proponents of the Mass in Limasawa, Robertson provided a footnote that the present name of Mazaua, the site of the historic Mass, is Limasawa.

They said Skelton also identified Limasawa as the current name of Mazaua.

On the Mojares panel’s request, the NHCP secured a copy of each extant Pigafetta manuscript abroad and had the section that narrated the 1521 Easter Sunday Mass transcribed and translated.

The panel later noted Robertson’s observation that the Ambrosiana Codex was “workmanlike rather than elegant.” It agreed with Skelton that it might have been derived from the original Pigafetta journal while the Nancy Codex was a copy where Pigafetta reworked some of his text to entice sponsors to publish his manuscript for the use of future explorers.

“After noting that Robertson and Skelton agree that the aforesaid codices complement each other and their translation had only minor differences, the panel dismissed Mr. Atega’s claim that Skelton should be used as the standard text in determining the site of the 1521 Easter Sunday Mass. The panel also disagreed with Mr. Atega’s assertion that historians who supported the Limasawa position relied only on the Ambrosiana Codex and the Robertson translation,” the NHCP’s Escalante said.

Atega emphasized the determination of longitude to pinpoint the location of the first Mass. Citing primary sources, he traced the route taken by the Magellan expedition and concluded that 93⁄4 degrees latitude combined with his reading of longitude coordinates in other sources led to Butuan as the site of the Mass.

Although it deemed Atega’s research commendable, the panel said longitudinal measurements during the Age of Exploration were “imprecise and unreliable” because these navigational coordinates were estimates and scientifically imprecise.

It pointed out the chronometer, the instrument invented by John Harrison to measure longitude accurately, was only invented in the 1760s.