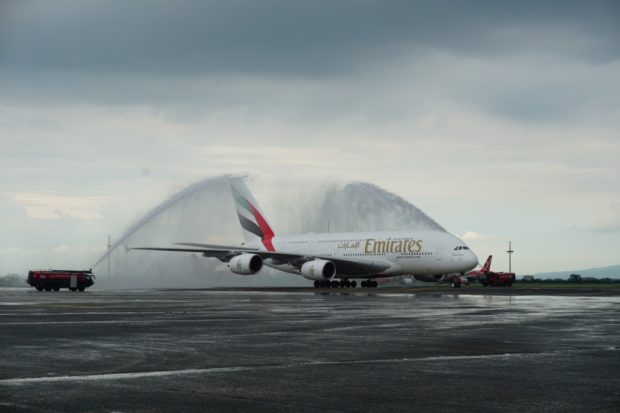 According to the Bases Conversion and Development Authority (BCDA), the A380 flight was brought in by Emirates, a world-class airline and the flag carrier of the United Arab Emirates (UAE).

Emirates is also the world’s leading operator of the A380 line, a double-decker airplane that can hold over 500 passengers in its cabin.

The special flight was carrying 405 passengers from Dubai, including overseas Filipino workers returning home due to the COVID-19 pandemic.  After the plane touched down, a ceremonial water cannon salute was given for maiden flight.

“Today’s A380 maiden flight in Clark forms part of Emirates’ celebration of their 30th anniversary of serving the Philippines,” BCDA said.  “The highly-popular Emirates A380 aircraft enabled the passengers to have a world-class travel experience, with the aircraft’s unique features and safety protocols put in place to protect both the airline’s customers and crew.”

“Emirates has seen a huge demand for its six weekly flights from Dubai to Clark as well as in its daily flights to Manila since it resumed operations earlier this month. It will also resume operations in Cebu this week,” it added.

It was announced by the Luzon International Premier Airport Development (Lipad) Corp. that the Emirates would be launching its A380 flights in Clark, which would help meet demands for flights in the country with its larger capacity.