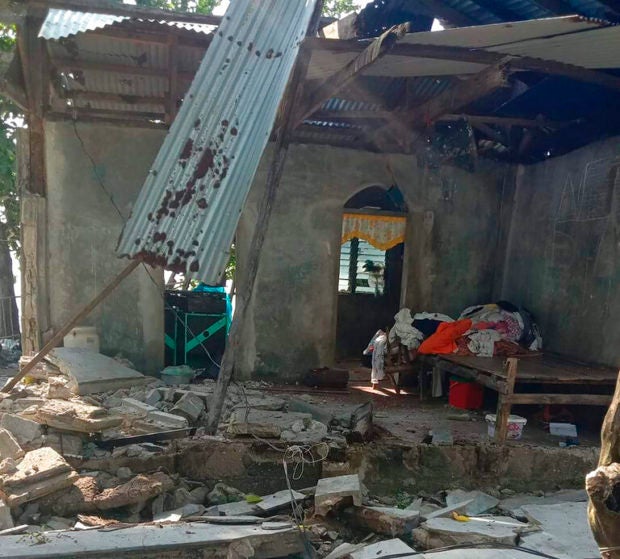 In this photo provided by the Philippine Red Cross, debris are scattered at a house after a magnitude 6.6 quake struck in Cataingan, Masbate province, central Philippines on Tuesday Aug. 18, 2020. A powerful and shallow earthquake struck a central Philippine region Tuesday, prompting people to dash out of homes and offices but there were no immediate reports of injuries or major damage. (John Mark Lalaguna/Philippine National Red Cross via AP)

MANILA, Philippines — The damage to the infrastructure brought by the magnitude 6.6 earthquake in Masbate and other areas was estimated to be at P23.96 million, according to the Department of Public Works and Highways (DPWH).

In a statement on Wednesday, DPWH said that several bridges, roads, and public buildings were damaged due to the earthquake that hit on Tuesday morning.  Partial cost of damages on roads amounted to P5.64 million, while it was estimated at P8.96 million for bridges and P9.35 million for public buildings.

All national roads are still passable, but there are sections especially in Masbate Island that show cracks on the pavement.

Other bridges and roads damaged include the following:

Earlier, the Philippine Institute of Volcanology and Seismology (Phivolcs) reported that state seismologists have already recorded over 200 aftershocks since Tuesday’s earthquake, including the magnitude 5.1 that hit 12 kilometers southwest of Cataingan early Wednesday morning.

Phivolcs previously said that minor to moderate aftershocks are possible, although they are not discounting that stronger earthquakes may still occur.

In its primer after the earthquake, Phivolcs advised residents and local governments to avoid visibly-damaged and collapsed buildings as the structural integrity may worsen with aftershocks.

They also urged people in affected areas to inspect buildings and roads for possible cracks, as it may lead to more damage and possible landslides.

“The expected aftershocks may also cause further damage to already weakened structures. In the case of houses and other buildings with visible damage, it is best to contact the concerned Municipal/City Engineering Office for advice,” Phivolcs said.

“Civil engineers from the local government, other agencies and organizations are strongly enjoined to inspect buildings and infrastructure to determine their integrity and recommend appropriate actions to the affected population. Structurally compromised buildings should not be reoccupied unless certified safe by structural engineers,” it added.