MANILA, Philippines — Philippine National Police (PNP) chief Gen. Archie Gamboa said he has no power to suspend the nine policemen involved in the shooting of four military intelligence officers in Sulu last July, unless they have been found guilty of charges against them.

During the Senate public order committee investigation on Wednesday, Gamboa said he can only place the nine cops under restrictive custody. Gamboa made the statement after Senator Risa Hontiveros inquired why the policemen involved in the shooting have yet to be administratively suspended.

In response, Gamboa said his power as the PNP chief is limited in terms of suspending police officers

“They are not administratively suspended because we cannot do so. The chief PNP’s power…. is only restrictive custody, that is the most that we can do under our regulation, we cannot even detain them. We cannot even preventively suspend them unless there’s due process,” Gamboa said.

“What happens is that cases are filed, investigated and if they are found guilty of the administrative charge, they can be suspended, but there is no such thing as suspension prior to any administrative proceedings. We cannot do that in the PNP,” he added.

Atty. Alfegar Triambulo, inspector general of the PNP’s Internal Affairs Service, explained to the committee that police officers in restrictive custody will still be able to perform their duties but their movements will be restricted.

“They are still police, they will perform duties as a policeman but their movement is restricted to ensure their presence during investigations… nandiyan po sila,” Triambulo said. 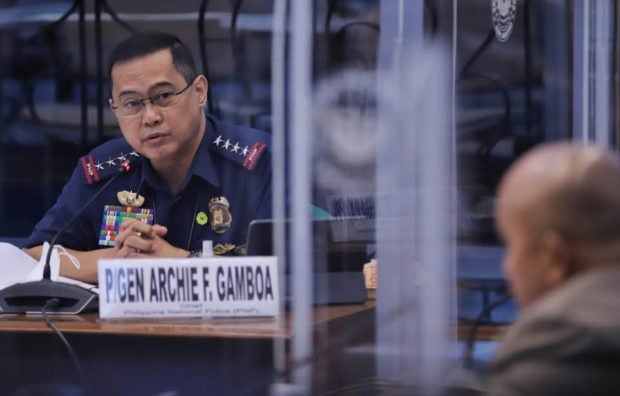 But the retention of the status of the nine police officers puzzled Hontiveros.

They were dispatched by the Joint Intelligence Task Group and the Task Force Sulu after technical intelligence detected the possible location of two female suicide bombers and the maker of their suicide vests.

An investigation by the NBI showed that the police officers simultaneously attacked the Army Intelligence officers without “the opportunity to defend themselves.”

Contrary to the claims of the police that one of the victims has a gun, the NBI said witnesses said that Indammog did not carry a firearm when he alighted from their vehicle.

Read Next
Palace: 8 pm-5 am curfew in NCR starts Wednesday night except in Manila, Muntinlupa, Pasig
EDITORS' PICK
97% of COVID-19 beds at PGH currently occupied
Gear up and get ready to play with Yamaha Mio Gear
Acer starts the year off strong with the Aspire Vero National Geographic Edition
Japan brings back virus restrictions over Omicron surge
Over 3 Million worth of prizes to be won at Smart Padala’s SENDali Manalo Promo!
Uproar over no vax, no ride policy: Maybe it’s time for gov’t to say sorry—Bello
MOST READ
1Sambayan names 7 aspirants in its 2022 Senate lineup
Emma Stone calls Andrew Garfield a ‘jerk’ after he ‘lied’ about his ‘Spider-Man: No Way Home’ appearance
Guevarra to Acosta: Obey rules on unvaccinated
PH to import 60,000 tons of fish to cover shortage
Don't miss out on the latest news and information.