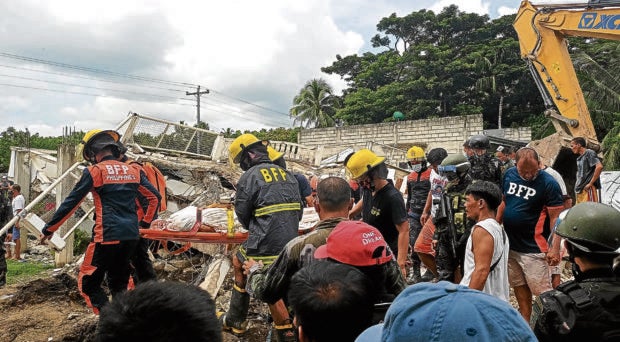 FATALITY Rescuers in Cataingan, Masbate, retrieve the body of retired Police Col. Gilbert Sauro from the debris of his house, one of the structures toppled by a 6.6-magnitude earthquake that struck the province on Tuesday morning. The quake, which was also felt in parts of the Visayas and Bicol region, left widespread damage on Masbate’s roads and residential areas. —JAYVEE VALLECER/CONTRIBUTOR

It took the temblor for the local government of Cataingan town to decide to send posthaste at least 101 locally stranded individuals (LSIs) to their villages as the municipal astrodome where they were quarantined suffered cracks.

A retired police colonel died after he was pinned by debris when his three-story house collapsed in Barangay Concepcion.

Gilbert Sauro was the only fatality recorded so far in the quake as of Tuesday afternoon, according to Rojo.

The Philippine Institute of Volcanology and Seismology (Phivolcs) said the quake struck around 8:03 a.m.

The epicenter of the quake, which was tectonic in origin, was estimated at 7 kilometers east of Cataingan, with a depth of 21 km.

Phivolcs Director Renato Solidum Jr. said the quake was caused by the movement of the southern end of the Masbate segment of the Philippine fault zone.

“In 2003, this segment also moved, but on the northern portion,” Solidum said in an online press briefing. “Cataingan is at the end of this fault rupture that was seen after the 2003 earthquake.”

Destructive Intensity 7The tremor was felt strongest in Cataingan, where the quake was recorded at Intensity 7, which is classified as “destructive” in the Phivolcs Earthquake Intensity Scale.

Extensive damage to some structures that are in or nearby Cataingan is expected, according to Phivolcs.

Strong shaking was also felt in the City of Masbate, and in Almagro and Tagapul-an towns in Samar province, and in varying intensities in several towns in Sorsogon, Albay, Northern Samar, Leyte, Negros Occidental, Negros Oriental, Antique, Aklan, Iloilo and Quezon provinces.

Despite the strong quake, Solidum assured the public that there was no threat of a tsunami.

Phivolcs advised the public to be alert for aftershocks, with at least 28 recorded near the epicenter as of 1 p.m. on Tuesday. The strongest was 4.2 magnitude recorded past 4 p.m.

Eryl Manatad, a teacher and resident of Barangay Poblacion in Cataingan, said family members were advised not to go back to their homes as aftershocks were expected.

Manatad said she and other members of the family were having breakfast when they felt the earthquake. “It intensified even more that we could not easily run to get out of our house,” she said.

“I have two babies and I first carried my 5-month-old infant to an open space,” she added. 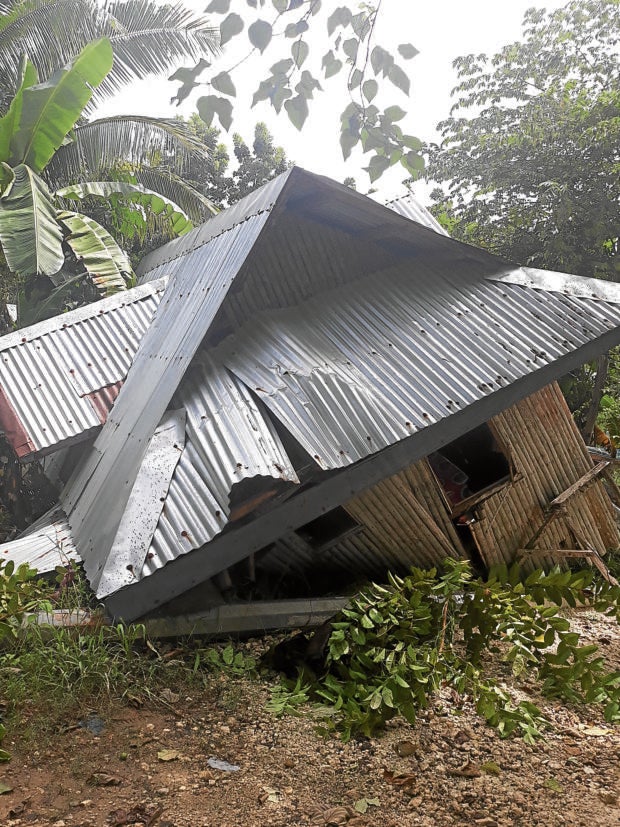 SHAKEN VILLAGE Tuesday’s 6.6-magnitude earthquake did this to one of the houses in Barangay Poblacion, Cataingan town, Masbate province. Municipal officials were forced to send more than a hundred quarantined people to their villages after cracks were found on the building where they were supposed to stay for a few more days. —NAEN PEREZ/CONTRIBUTOR

While her house was swaying, Czyra Camille Garganta, a resident of Barangay Curvada in Cataingan, ran to the toilet to get her mother who has a disability.

The quake scattered and broke furniture and kitchenware, while the concrete fences of a neighbor collapsed.

“My mother was almost hit by the refrigerator. Good thing we were able to go out of our house,” said Naen Perez, a resident of Barangay Poblacion.

She said an abandoned two-story house was destroyed, while other houses suffered large cracks on their walls.

The quake toppled power lines in the towns of Cataingan, Pio V. Corpus, Placer, Uson and Esperanza, causing power interruptions, according to the Masbate Electric Cooperative.

Roads and docking area of the port were also damaged.

Several streets and buildings throughout Masbate were reported cracked or damaged, according to the Office of Civil Defense in Bicol.

The Civil Aviation Authority of the Philippines said Masbate Airport (formally known as Moises R. Espinosa Airport) remained operational and did not sustain significant damage during the earthquake.

“They saw reflective or surface cracks on the runway but these do not pose any danger to planes. The airport continues to host sweeper flights,” the agency’s spokesperson, Eric Apolonio, said in a phone interview.

Solidum advised those affected by the quakes to ensure the structural integrity of their homes and buildings before returning to them.

Should they need to evacuate, they should follow strict health protocols, such as social distancing measures, to ensure that the new coronavirus will not spread within their communities.

“This is a reminder for us that even during a pandemic, there may be destructive natural hazards so we need to prepare for both of these instances,” he said.