‘I can consider him godfather of the (PhilHealth) mafia’ 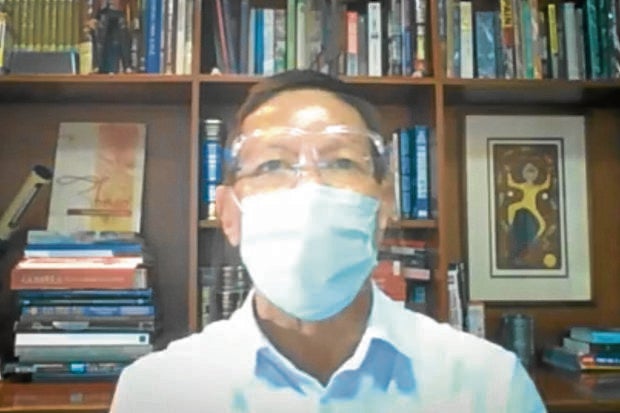 MANILA, Philippines — Health Secretary Francisco Duque III, who has had stints on the board of Philippine Health Insurance Corp. (PhilHealth) for nearly two decades, could be the “godfather” of the so-called mafia, whose members allegedly fleeced the state-run corporation of billions of pesos, a former antifraud officer of PhilHealth told senators on Tuesday.

Lawyer Thorrsson Montes Keith, who blew the whistle on the supposed massive fraud that cost PhilHealth P15 billion in 2019 alone, said Duque’s influence was evident even in the crafting of the controversial interim reimbursement mechanism (IRM), a P30-billion financial package intended for hospitals treating COVID-19 patients.

Upon questioning by Sen. Grace Poe, Keith said the health secretary should have conducted due diligence before releasing cash advances to hospitals as chair of the PhilHealth board.

“I can consider him the godfather of the [PhilHealth] mafia,” Keith said.

Asked by Poe to expound, he said: “Since he has institutional knowledge about the PhilHealth management, you can easily see his [involvement] in the anomalies.”
”[Duque] also approved the appointments of almost all the members of the mafia,” he added.

Keith has accused PhilHealth President and CEO Ricardo Morales of being the “coddler” or “new leader” of the corruption syndicate, which he claimed was composed of the entire PhilHealth executive committee.

Duque, who participated in the hearing via internet, dismissed Keith’s accusation as “malicious and without basis.”

“I do not wish to dignify that allegation,” the health chief said.

At the Senate hearing, the ghost of the allegedly rigged 2004 presidential election also haunted Duque.

A senior official of PhilHealth claimed that Duque had ordered the distribution of 5 million PhilHealth cards to boost the campaign of then-President Gloria Macapagal-Arroyo.

Regional Vice President Dennis Adre said PhilHealth lost billions of pesos for the first time as a result of the issuance of the health insurance cards to voters.

As earlier pointed out by Sen. Risa Hontiveros, Adre said the health secretary could not feign ignorance of fraud and other irregularities in PhilHealth as he had been part of its board for almost two decades in various capacities.

“Secretary Duque knows all that’s happening in PhilHealth. He has been with PhilHealth for almost 20 years,” said Adre, who participated in the proceedings via the internet.

“[He knows] these unfortunate [events] in PhilHealth—the weak policies, the weak legal system, the weak IT (information technology) system. All the harassment and oppression cases against the officers who advocated reforms had the blessings of [Duque],” Adre said.

He said Duque, who was the health secretary and PhilHealth chair then, had summoned all regional chiefs of the state-run health insurer to a meeting in 2003 to implement “Plan 5 million,” which, he claimed, was a plot to overcome the 5-million vote lead of then presidential front-runner, film superstar Fernando Poe Jr. over Arroyo.

“And that was the first time that the financial statements of PhilHealth had been window-dressed,” he told Poe.

He said the corporation’s financial records had to be manipulated “because they had to make up for the losses that were incurred for the nonpayment of premiums [for] ‘Plan 5 million.’”

While the issue was connected to the presidential campaign of her late father, Poe said she was more concerned with the fact that public funds had been apparently used for the candidacy of a politician.

“A government institution is being used for personal interests. That’s not right … It might happen again … It’s a form of vote-buying,” Poe said.

Asked by Hontiveros to comment on Adre’s claim, Duque flatly rejected that PhilHealth handed out membership cards to help Arroyo win the 2004 presidential race, adding that the criminal cases regarding the project had all been dismissed. “I deny strongly that allegation,” the health chief said.

Adre, who has been on floating status since September last year, said Duque and other senior PhilHealth officials had ordered the transfer of officers to other regions as “punishment” for calling out irregularities and “flawed policies” in the corporation.

Appearing at the Senate proceedings for the first time, Duque defended the implementation of the IRM.

He initially echoed the claim of Morales that the cash advances could also be given to dialysis centers and maternity clinics, which had already received P231 million as of June 9.

But upon questioning by Sen. Panfilo Lacson, Duque admitted that PhilHealth Circular No. 2020-0007, limited the release of the funds to medical cases involving new coronavirus disease.

Lacson reiterated that the circular clearly stated that the financial package only covered “fortuitous events,” such as man-made and natural calamities.

“Kindly define a fortuitous event. Your understanding of a ‘fortuitous event’ may be different from our definition of that,” Lacson asked Duque, who joined the hearing online.
“These are unforeseen [events] or force majeure,” the health secretary replied.

Pressed by Lacson if he considered undergoing dialysis and giving birth as “fortuitous events,” Duque conceded that these were not.

Duque also said the senator was right in concluding that the release of P45 million in IRM funds to dialysis center B. Braun Avitum Philippines Inc. was “illegal” and that it was tantamount to malversation of public funds.

PhilHealth records show that the corporation paid B. Braun a total of P811 million in benefit claims for dialysis from 2015 to 2018, according to Lacson.

“Is this another case of ‘WellMed dialysis scam’ in the making?” he said, referring to WellMed Dialysis Center, the private dialysis clinic in Quezon City that allegedly facilitated the claims for the dialysis of patients who had already died.

Minority Leader Franklin Drilon raised questions about the liquidation of IRM funds to hospitals, which he said must be done as soon as possible under the rules of the Commission on Audit.

Of the P15 billion released starting March, only P2.3 billion has been liquidated, according to PhilHealth Senior Vice President Renato Limsiaco Jr.