‘This is designed to silence us and stop us,’ says Gabriela Southern Mindanao head
By: Germelina Lacorte - @inquirerdotnet
Philippine Daily Inquirer / 04:10 AM August 15, 2020

DAVAO CITY — Human rights and “lumad” (indigenous peoples) advocates here are alarmed by a set of posters seen on the walls, gates and fences in different areas in this city, tagging them as “human rights violators” and “berdugo” (executioner), which they took as a threat and a means to silence them.

“This vilification campaign is trying to condition the minds of people that killing us would be justified because we are ‘berdugo.’ In psychology, they call that ‘projection,’” said Dr. Jean Lindo, chair of the women’s group Gabriela in Southern Mindanao, who was among those tagged in the poster. “We do take this seriously as a threat. This is designed to silence us and stop us from defending human rights,” she said.

The posters were first seen on the side gate of Sta. Ana Church on Wednesday but later, another set was also posted outside the premises of the Southern Philippines Medical Center, on the fences and other places in Cabaguio, Bajada, and Lanang areas.

The posters did not say who had them made but activists here suspected that they were the handiwork of state forces who had previously labeled militants as communist rebels or supporters.

Police Col. Kirby John Kraft, chief of the Davao City police, said the new posters had not yet come to his attention but he would investigate who would have anything to gain from those posters.

He said that similar posters tagging leaders of progressive groups as “recruiters” for the communist New People’s Army also circulated shortly after the President’s State of the Nation Address in July.

“We would like to know who are the people who stand to gain from these posters because, on the part of the government, there’s no need to post these posters in the first place,” Kraft said. “Are they posting it so that if something happens to them, they will blame the government?” he asked. 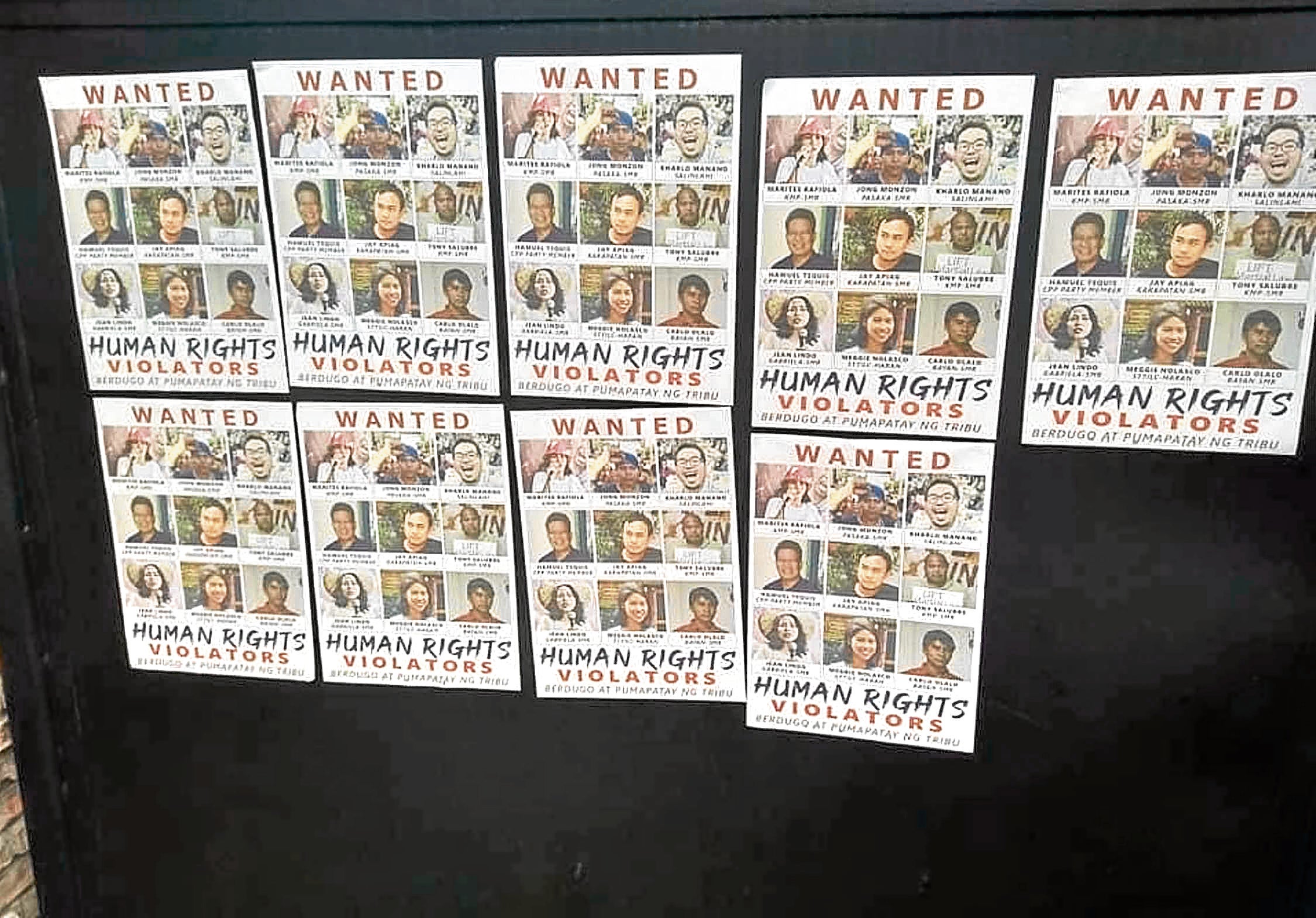 WHO DID THIS?WHO GAINS? Posters tagging nine activists and “lumad” rights advocates in Davao City as “berdugo” (executioners) and “human rights violators” have sprouted in at least four barangays. Photo taken on Friday shows some of the posters on the gate of Sta. Ana Parish Church in Barangay 14-B. —CONTRIBUTED PHOTO

Lindo said she had also taken precautions, as some activists had been killed or have gone missing, including Hanimay Suazo, former secretary-general of Karapatan, who disappeared in November 2019.

“These are activists who have genuine work,” Lindo said. “The sectors that we serve are marginalized and as always, excluded from decision making, resource allocation, development. Yet, we assert that their voices be included in legitimate mainstream issues, [that they could benefit from] mainstream self- development,” Lindo said.

The poster was the second of its kind to come out barely a month after the controversial Anti-Terrorism Act of 2020 has taken effect in the country.

On July 22, only days after the Anti-Terrorism Act was signed, another set of posters Red-tagging another set of activists were seen in Barangay Maa.

Nolasco said that the vilification campaign had been going on for a long time for the lumad schools of Salugpungan, which were closed down by the Department of Education and the military in January last year.

“In the midst of a worsening COVID-19 crisis, human rights defenders, including the executive director of Salugpungan schools, once again became the target of state terrorism through malicious posters circulated in Davao City,” Salugpungan said in a statement. “This latest attack highlights the cowardice and depravity of Duterte’s lapdogs who, desperate in covering up its impotence in addressing the pandemic, resort to violence against human rights defenders.”

Salugpungan said the attacks against lumad schools had been relentless since the pronouncement of President Duterte to bomb the lumad schools in 2017. Trumped up charges had been filed against Salugpungan personalities, teachers and lumad leaders, and some students were killed before the schools were finally closed, disenfranchising more than 2000 pupils of their right to education.

In January this year, a resolution from the Regional Peace and Order Council called for the closure of UCCP Haran here, which hosted a school for lumad fleeing militarized communities in Davao del Norte and Davao de Oro provinces.

The Salugpungan statement said that following these attacks were massive Red-tagging campaigns of lumad supporters and volunteers. “Forcible closure of other schools were sped up during the nationwide lockdown, which brings the number of different lumad schools closed to 178, disenfranchising more than 5,500 students all over Mindanao,” it said.