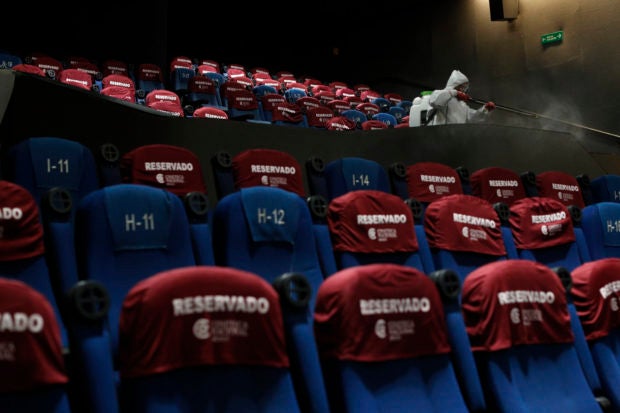 MEXICO CITY — The few, the brave — those were the people returning this week to movie theaters in Mexico City that had been closed for four months due to the coronavirus pandemic.

Yes, there was popcorn. But moviegoers had to wear face masks, and could only lift them to eat or drink. And their temperatures were checked at the entrance. They also had to walk on a sanitizing mat.

Dates were okay, but forget about sitting with a group of friends: no more than two people were allowed to sit together, as long as they were surrounded by empty seats.

Theaters in the capital have been allowed to open at only 30% of capacity — entire rows were blocked off with yellow tape — but even so, there was no competition for the best seats.

At an IMAX screen in Mexico City, only about 10 customers showed up Wednesday, but technical problems with a projector put off the scheduled screening of the 2014 space drama “Interstellar”.

“It felt great to be able to come back, “said Matías Mora. “For me, seeing a film in a movie theater is the definitive way to see it.”

With new movie premieres delayed by worldwide lockdowns and theaters scrambling to find something to show, the pandemic has at least brought back the classics.

Antonio Alamillo, 47, a bakery manager, and Nélida Cartujano, 42, a teacher, came to see the 1955 James Dean classic “Rebel Without a Cause”.

“I was here on the last day the theaters were open and here I am on the first day they opened again,” said Alamillo. “I can’t live without the cinema.”

Movie theaters in Mexico sold about 350 million tickets, making Mexico the fourth largest movie market in the world, after China, India and the United States. In terms of revenues, Mexico was in ninth place, with ticket sales worth about $850 million in 2019. The country has relatively low ticket prices.

But the movie theater business chamber, Canacine, estimates Mexican movie houses lost about 152 million ticket sales during the shutdown, which lasted from March 25 to August 10. At least a dozen movie theaters across the country have announced they will close permanently.

Mexico’s Culture Secretary, Alejandra Frausto, was at one of the first showings at Mexico City’s Cineteca Nacional complex.

“A moment like this, returning to the movies, seemed impossible,” Frausto said. “But that is precisely what art does, make the impossible possible.”

Harry Potter, Spielberg, Nolan and 4DX to the rescue of British cinemas