MANILA, Philippines — Relatives of a political prisoner, who recently gave birth in jail, have asked the Supreme Court (SC) to allow her and other inmates humanitarian release amid the COVID-19 pandemic – which would also give her the chance to take care of her newborn daughter.

According to Marites Asis, mother of Reina Mae Nasino, she felt her daughter’s pain as jail officers handed the newborn baby to her as a Manila court junked Nasino’s appeal to have her daughter stay with her at the Manila City Jail’s female dorm.

(Mother and child, it is so painful to see them separated.  I can feel the pain felt by my daughter.)

(It is painful because I can see my daughter.  That’s why I am calling on the Supreme Court.  Please make the decision so that she can be with her daughter.) 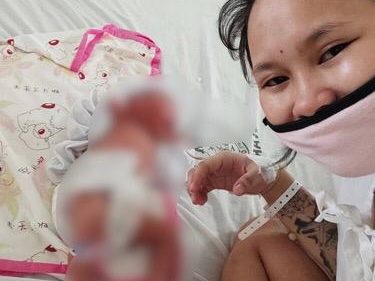 Nasino is one of the political prisoners seeking temporary release as the potentially-deadly respiratory illness COVID-19 spread across the country, posing danger to jail facilities and other detention cells that are already congested even before the pandemic happened.

Last July 22, the Department of Interior and Local Government (DILG) said that almost 22,000 inmates have been released to decongest jail facilities nationwide and prevent possible coronavirus transmission inside prison cells.

Asis said she feels her daughter is being punished for no explainable reason.  Nasino was a student activist working with urban poor groups when she was arrested in November 2019.

Activist groups insisted that these were merely trumped-up charges, but police said they were caught in possession of illegal firearms.

(It’s like she’s being punished.  That’s why I am again calling for help so that my daughter can be released.  This is what I am asking of the Supreme Court.  Please hand down the decision.)

Meanwhile, the National Union of People’s Lawyers (NUPL), which serves as Nasino’s counsel, noted that these actions — taking the newborn child away from her mother — is the peak of the government’s heartlessness.

They underscored that since Nasino’s nutrition was compromised during pregnancy, the infant had a low birth weight that necessitates breastfeeding and maternal care.

“We received a frantic call this morning from our client, political prisoner Reina Ina Nasino. Between sobs, she told us that her one-month-old baby will now be separated from her after the Manila court denied our motion to allow her to keep her baby so that she can breastfeed and care for her,” NUPL said.

“Ina was nutritionally at-risk while she was pregnant; thus, her baby was born of low birth weight.  Ina has just been informed that the officer-in-charge of the Manila City Jail Female Dorm has already ordered her daughter to be removed from the jail facilities and be given to her relatives outside of prison, also within the day,” it added.