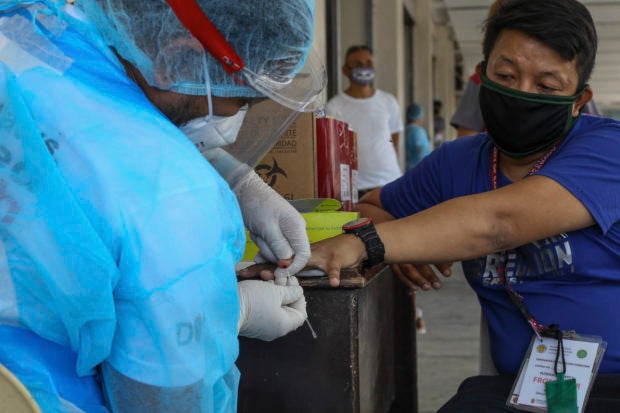 MANILA, Philippines — Presidential Adviser for Entrepreneurship Joey Concepcion defended rapid antibody tests, like the ones being conducted by the private sector-led Project Ark (Antibody Rapid Test Kits), after physicians blamed them for the surge of new cases in the country.

“(Reverse transcription-­po­ly­merase chain reaction, or RT-PCR) is now being denied patients with symptoms,” physicians said in a paid advertisement that appeared in newspapers on Aug. 1. “ [Local government units] that do test continue to insist on the use of inappropriate rapid antibody tests to identify cases of COVID-19, sending home patients with symptoms who test negative.”

“This may be responsible for the surge of cases we are now experiencing because rapid tests miss more than half of people with active, contagious illness,” medical groups said.

But Concepcion disagreed that rapid antibody testing caused the surge and argued that it was precisely the exclusive and slow testing that allowed infected but asymptomatic people to walk around free.

“To say rapid test kits are reason for the surge in infection, I beg to disagree totally. The reason is basically we [were] not testing asymptomatic people much earlier. We were only testing symptomatic people,” he said.

Concepcion, who heads food and beverage company RFM Corp., was among the first to propose barangay-level quarantines and sustained mass testing. He later initiated Project Ark even before the government sent home untested but infected individuals to areas where there were previously no COVID-19 cases.

Concepcion continues to push mass testing even as the country plunged into a recession because of the slowdown in economic activity.

“We have to start operating because [in] Christmas, we will be supplying a lot of food to the Filipino people,” he said.

“So from August to December, those plants [will be] running 24 hours seven days a week. So we can’t afford to shut down because of the infection. So that’s why testing will even go as high as once every week, whether we use antibody testing, or pooled PCR,” Concepcion said.

He was referring to the pooled testing via RT-PCR, the acknowledged confirmatory molecular test for COVID-19.

“To say it’s totally useless is rather irresponsible. I have to say that categorically because they have their use. What’s important is to know their limitation,” she said.

“It is very unfortunate that recently there was a lot of irresponsible noise about rapid antibody test kits and it created more confusion and fear in a population that was already confused,” Padilla said.

“As the medical head, I have access to a lot of data from various companies and we can tell you now that as long as the companies stuck to the medical protocol, it has helped them use the antibody rapid test kits to open, to stay open and to have safe working environments,” she added.