Echanis family gets his body after fingerprint match 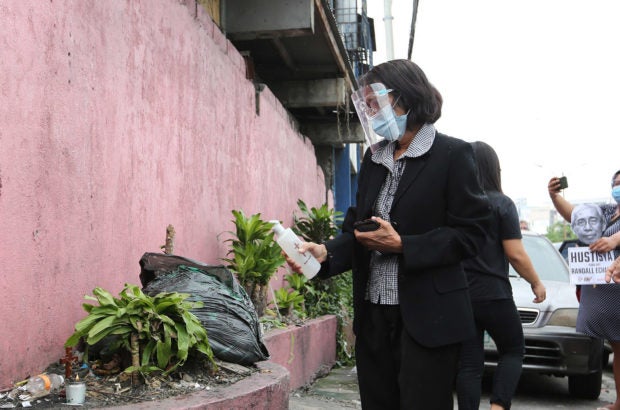 MANILA, Philippines —The Quezon City Police District (QCPD) on Wednesday said it would return the remains of slain peace consultant Randall “Randy” Echanis to his family after his identify had been established.

Maj. Gen. Ronnie Montejo, the QCPD chief, told reporters that Echanis’ right thumbprint matched with that on his identification card from Barangay Aguho in Pateros.

He said they would continue the investigation of the killing to identify the assailants.

Echanis and his neighbor, Louie Tagapia, were found dead in his apartment in Novaliches, Quezon City, early on Monday.

Another neighbor told police he saw about five men hurriedly leaving the premises after he heard a commotion in the apartment.

The dispute over the custody of Echanis’ body was triggered by the discovery of an identification card with a picture of Echanis but in the name of a certain Manuel C. Santiago, a supposed a senior business consultant for a company called Innotech Solutions Intl.

The police brought Echanis’ body to Pink Petals Memorial Homes in La Loma. After identifying the body, his widow had it transferred to St. Peter’s Memorial Chapel on Commonwealth Avenue. But the police on Monday night “forcibly seized” Echanis’ remains and returned them to Pink Petals, according to Luchi Perez, a lawyer for the Echanis family.

His widow condemned the police action, saying it added “insult to our injury” and deprived her family of a “proper and private mourning.”

The family was told to produce evidence such as fingerprints or DNA test results to prove that the slain man was Echanis.

“Only the court can decide. Thus, all test results and other supporting proofs, they must present when they file a petition before the court,” Banac said.

Reacting to Banac’s statement, Perez said it was “highly unusual that a DNA test is needed in addition to a positive identification of the spouse and the positive crossmatch” of fingerprints.

“That is making the family go through so much more suffering,” she said.

An independent autopsy to be led by the Commission on Human Rights and forensic pathologist Dr. Raquel Fortun, which was planned for Wednesday, may be postponed, depending on when the funeral home releases the body, Perez said.

She said if the body were released on Wednesday, an X-ray would be done in the evening and the autopsy would be conducted on Thursday.

Echanis, 71, served as a consultant for the National Democratic Front of the Philippines in peace talks with the government during the early months of the Duterte administration. President Duterte later scuttled the talks, accusing the rebels of attacking government troops while the negotiations were ongoing.

A private physician who had examined Echanis’s body found that he had been shot twice in the back of the head and was also stabbed multiple times, according to Perez.

The party-list group Anakpawis, which Echanis headed before his death, believed that he was killed by state forces.

But Montejo said the killing could have resulted from a robbery by an “akyat-bahay” or a personal grudge against Tagapia, who appeared to have been the main target of the assailants.

“We can’t say how Randall Echanis got involved,” he said.

Maj. Elmer Monsalve, chief of the Criminal Investigation and Detection Unit of the QCPD, pointed out that only Tagapia was tied up, which could mean he was the real target.

Tagapia, 48, was jailed on drug charges and got out on April 28. He also had a Sputnik Gang tattoo on the right portion of his back.

The apartment’s landlady Fatima Pascua, said Echanis moved in on June 20 rent-free as a favor to her sister, Montejo said.

Echanis presented the Santiago ID card when she asked for identification, he said.

Anakpawis also denounced the arrest of paralegal worker Paolo Colabres, who was charged with “obstruction of justice” by the police also on Monday.

Colabres was tasked with watching over Echanis’ body and followed it back to Pink Petals after it was seized by the police.

Jobert Pahilga, another lawyer for the Echanis family, said Colabres was seeing to it that the authorities would “not do anything to the body of Ka Randy.”

He said a person pretending to be a relative of “Manuel Santiago” could appear at the funeral parlor and ask to immediately cremate the body.

The human rights group Karapatan said it would rather have the CHR conduct an investigation of the killing of Echanis than a Department of Justice (DOJ) task force.

“Hundreds of activists have already been killed under this fascist regime and the DOJ’s task force has failed to bring [any] of them to justice and hold their perpetrators accountable,” said Karapatan secretary general Cristina Palabay.

“How can there be trust with this task force when the police are already blatantly pulling all the cruel and wicked maneuvers to obstruct justice for Ka Randy Echanis?” she said.

—With reports from Nestor Corrales and Patricia Denise M. Chiu