WASHINGTON — President Donald Trump on Tuesday called Kamala Harris the “most horrible” member of the US Senate and said he was “surprised” Joe Biden had picked her as his vice presidential candidate. 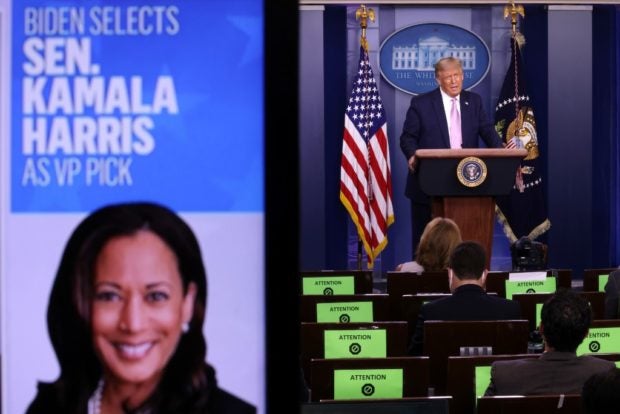 U.S. President Donald Trump speaks as a picture of Sen. Kamala Harris (D-CA) is seen on a screen during a news conference in the James Brady Press Briefing Room of the White House August 11, 2020 in Washington, DC. Trump discussed the coronavirus and several other topics, including the announcement by Democratic presidential candidate, former Vice President Joe Biden that he has chosen Sen. Kamala Harris to be his running mate in the 2020 general election. Alex Wong/Getty Images/AFP

Trump told reporters at the White House that Harris did not impress him when she was vying for the Democratic nomination in primaries eventually won by Biden.

“I was more surprised than anything else because she did so poorly,” he said.

He also said that during the bruising 2018 Senate confirmation hearings of Supreme Court Justice Brett Kavanaugh, Harris was “the meanest, the most horrible, the most disrespectful of anybody in the US Senate.”