MADRID — Just seven weeks after bringing its first coronavirus wave under control, experts say Spain is once again in a “critical” situation with the worst infection rate in Western Europe. 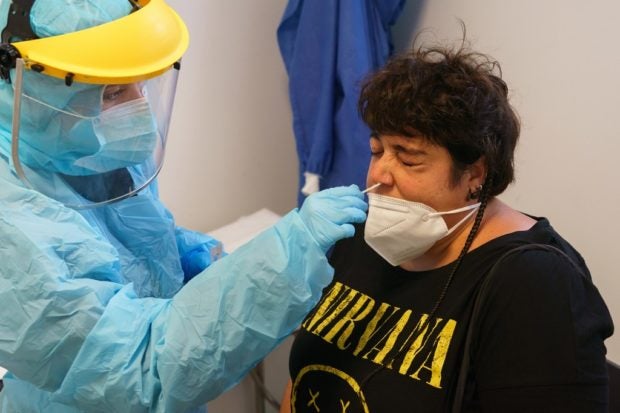 A healthcare worker dressed in protective gear takes samples from a woman for detecting the COVID-19 disease at the La Jota health centre in Zaragoza on August 10, 2020. Spain has added 19,405 new coronavirus cases in the past week, but the health ministry says the country is not entering a second wave of the pandemic. Photo by CESAR MANSO / AFP

The country reported an average of 4,923 new daily cases of the respiratory disease during the last seven days, a higher amount than that of Britain, France, Germany and Italy combined, according to a tally compiled by AFP based on official figures.

Spain counts 95 COVID-19 cases per 100,000 people, compared to 24 in France, 17 in Britain, 13 in Germany and just eight in Italy, the first country outside of China to be hit hard by the pandemic.

The spike has led a growing list of countries to impose restrictions on travel to Spain, which has nearly 323,000 confirmed cases of the disease, the highest number in Western Europe and 11th highest in the world.

“It’s a critical moment, we are right at a point where things can get better or worse,” said Salvador Macip, an expert in health sciences at Catalonia’s Open University who has written a book called “The Great Modern Plagues.”

“This means we have to pull out all the stops to curb outbreaks before they become more serious,” he told AFP.

There are currently more than 500 outbreak clusters in Spain, according to the health ministry. The ministry’s emergencies coordinator Fernando Simon acknowledged Monday that there are cases of community transmission in some places that are “not perfectly controlled” but he said they had “gradually subsided” in recent days.

Spain in mid-March imposed one of the strictest lockdowns in Europe to fight the spread of the virus, with people allowed outside only to buy food, seek medical care, briefly walk their dog or go to work if they could not do so remotely.

When the lockdown measures were completely lifted on June 21, the country reported just 238 new infections and it had just eight cases per 100,000 people.

But infections have surged since the first week of July, in part because the government “rushed” to open the economy “surely thinking about tourism”, a pillar of the Spanish economy, said Joan Cayla, the head of Barcelona’s Tuberculosis Investigation Unit, which now focuses on COVID-19.

Several outbreak clusters have been reported among seasonal farm workers — who often live in crammed conditions — since the summer harvest season began, helping fuel the rise in cases, Macip added.

And the start of warm weather has led people to “relax” a bit, in country where physical contact and get togethers with friends and family are common, Macip said.

He said the best way to curb infections is with more testing, public education campaigns and hiring more people to carry out contact tracing — and there have been “flaws” in all three areas.

The situation has led other European nations to be increasingly wary of Spain, with Germany on Tuesday classifying Madrid and Basque Country as at risk, advising tourists to avoid them.

Spain’s powerful regional governments, which are responsible for health care, have taken drastic measures to curb outbreaks, such as shutting down nightclubs and making the use of face masks in public mandatory despite the heat.

The federal government defends it record, arguing that more cases are being detected because more tests are being carried out — around 7.5 million so far, with 407,700 last week alone.

It points out that more than half of new infections are amongst asymptomatic patients, who show no symptoms but can still pass on the virus, that hospitals are far from being overwhelmed and that the rate of death from the virus has dropped significantly.

Spain recorded 950 daily COVID-19 deaths on April 2 alone when its first coronavirus wave peaked — compared to a total of 253 deaths since lockdown measures ended on June 21, for a total of 28,576 fatalities.