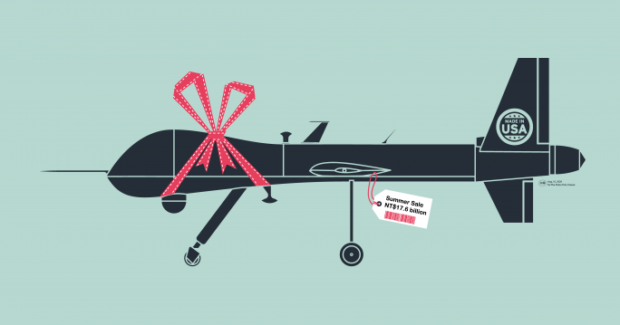 A U.S. drone is featured in this illustration amid reports that the United States is in negotiations to sell at least four advanced aerial drones to Taiwan for US$600 million (NT$17.6 billion), including expenses for ground stations, spares, training and support systems. Courtesy of DB/The China Post/Asia News Network

TAIPEI — There is a never-ending debate about whether the United States should defend Taiwan in the event of a Chinese invasion, even though little thought is usually given to whether it can do so successfully and at which costs, according to analyst Daniel L. Davis.

The senior fellow for Defense Priorities and a former lieutenant colonel in the U.S. Army made this argument in his recent analysis, “Can America Successfully Repel a Chinese Invasion of Taiwan?”, published on Aug. 6 in The National Interest.

This is a timely topic as U.S. authorities consider that China’s military buildup is threatening the stability of South East Asia while the Taiwanese are wondering whether the United States would be in the lead in repelling an eventual invasion of Taiwan.

The analyst argues that a tactical victory could also lead to devastating strategic losses, given that the likelihood of U.S. forces being defeated in a war between China and Taiwan remains “uncomfortably high.”

This argument does not mean that there are no alternative strategies to effectively protect U.S. interests at an affordable cost though, according to the U.S. analyst who warns that U.S. leaders should take the time to conduct their own assessment first.

Davis, however, laments that U.S. policymakers routinely engage in a context in which they have little or no understanding of the impact of such a scenario on U.S. foreign policy.

Former Pentagon official Joseph Bosco, for instance, echoed the wishes of many this summer when he called for Congress to pass the Taiwan Defense Act, expecting that U.S. policy will take military action against China’s military eventual aggression against Taiwan.

If the law is signed, however, the U.S. government would be obliged to delay and ultimately thwart any attempt by China to take military control of Taiwan, he points out.

Any act or treaty that the United States makes should clearly aim to maintain and expand the country’s capacity for prosperity, remarks Davis.

The problem is that it is clearly not in America’s interest to require a state to assume risks and costs while the other party reaps the bulk of the benefits, he continues.

The analyst suggests that the U.S. rather encourages its allies in the region, such as Japan, South Korea, and Taiwan, to further build their own military capabilities to dissuade China from using force.

Taiwan, in particular, should strengthen its defenses with its own Anti Access/Area Denial (A2/AD) weapon system – a device or a strategy used to prevent an adversary from occupying or traversing an area of land, sea or air – and raise the eventual costs of forcibly unifying with China.

Even if it would not guarantee that China would never attack Taiwan, Davis emphasizes that “it doesn’t make sense to risk military defeat or financial ruin when our interests are not directly threatened.”

This is an important question as U.S. Health and Human Services Secretary Alex Azar met with Taiwanese President Tsai Ing-wen on Monday, the highest-level visit by an American Cabinet official since the break of formal diplomatic ties between Washington and Taipei in 1979.