Dry run for start of classes marred by ‘glitches’ 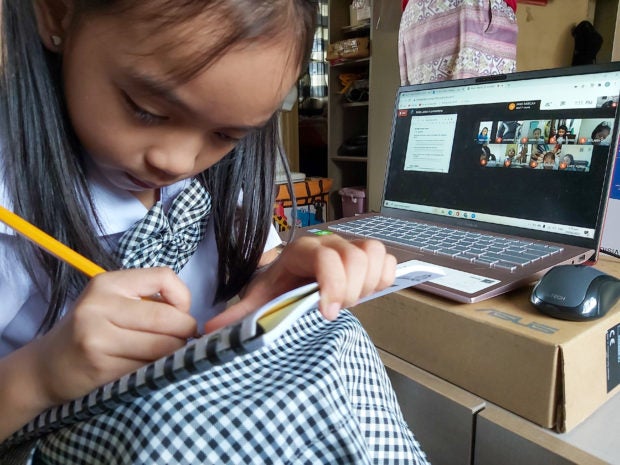 ‘BLENDED LEARNING’ From her home in Calamba City, Laguna province, a Grade 2 pupil dressed in her uniform takes down notes as she attends online class, conducted by the private school in Makati City where she is enrolled. —CHRIS QUINTANA

MANILA, Philippines — Technical glitches marred the national readiness dry run of the Department of Education (DepEd) on Monday for the opening of classes, but these were not enough to postpone the start of the school year on Aug. 24.

“We were supposed to do the (national kickoff) with livestreaming and televised and it was supposed to start at 8:45 a.m. I was personally present at the technical dry run last night, it was OK [but] this morning, we ha[d] problems with audio and communication,’’ Education Undersecretary Nepomuceno Malaluan said.

“Unfortunately, there was an attempt to correct it a few minutes, but it became clear it was difficult (to resolve),” he added.

The national kickoff was supposed to start at 9 a.m. at the DepEd regional office in Sarangani province as a dry run for the opening of classes in two weeks.

“Shall we give up because something went wrong? As we launched the readiness, we also learned about… acceptability, flexibility the readiness of sacrifice,” he said.

In a press conference on Monday while the DepEd was fixing the glitches, Secretary Leonor Briones said classes would push through despite calls from various groups to postpone the opening.

“There was no word from the President to change the date of the opening. He knows that face-to-face classes will be in 2021,” Briones said.

Mr. Duterte has declared that there will be no face-to-face classes until a vaccine for SARS-CoV-2, the virus that causes COVID-19, becomes available.

Briones said the DepEd would adopt a blended learning approach. “There are other ways to transmit knowledge [besides face-to-face classes].”

Asked if the glitches would taint the DepEd’s readiness to start in two weeks, Briones said these did not come from the department.

Briones said her office would pursue other modes if online learning would not work. “There are many families who do not want online …This is the advantage of having many options. There are many combinations you can try,” she said.

The alternatives include radio, which does not need information and technology. “If all else fails, we have a print medium,” she said, reiterating that the DepEd was ready.

She warned that learning might be degraded if the DepEd would postpone the classes. “Filipino students would be left behind by their counterparts in Asia.”

She noted that various Asian counterparts had already started in May and June, with some already preparing for the national assessment tests. “In the whole of Southeast Asia, only the Philippines and Cambodia have not opened.”

Briones claimed some students themselves “wanted” to start the classes, as schools were opening all over the world.

Covid-19 cases have erupted in face-to-face classes in many parts of the world, forcing certain schools to revert to online learning or to close for disinfection, as children and teachers undergo quarantine.

“The situation right now is that there are many unknowns. We can not give … the full details … but teachers and students have the autonomy to be creative,” Briones said.

She likened the start of opening to marriage. “Not everybody says they are 100-percent ready and they do get married and it works!”

“If you wait until you are completely ready [for marriage], by that time, there will be added problems because there is no end to challenges,” she said.

Education Undersecretary Diosdado San Antonio said assessments of students’ performance would be conducted through phone conversations after the end of the school year.

Health groups have sought the postponement of classes until such time that health measures are in place.

Briones said it was part of DepEd’s “humanitarian efforts” to assist the teachers in case they contracted COVID-19.

But funding for treatment of COVID-10 isn’t in the DepEd budget, according to Undersecretary Annalyn Sevilla.

“For those employees who opted to be treated in private hospitals, they will get assistance from[the] DepEd, … not from government funds but from the personal contributions and collective efforts of the DepEd family,” Sevilla said.