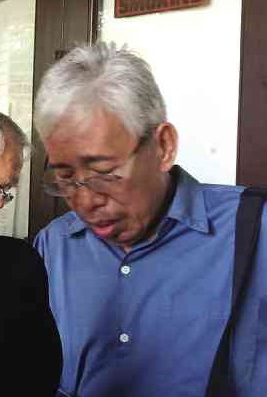 Former Anakpawis congressman Ariel Casilao said that Echanis, who was the national chairperson of the party-list, “was undergoing medical treatment, and unarmed when police forces raided his house.”

Anakpawis said Echanis “was stabbed by suspected state forces inside his rented place in the wee hours of the morning.”

Echanis’ death was denounced by Casilao and other activist leaders.

“Our anger is beyond words. This is a culture of extrajudicial killings with impunity under the Duterte regime. This is a declaratory act that national leaders of legal-democratic movement are now targeted to be killed by the Duterte regime. The entire civil society, human rights advocates, and freedom fighters must totally denounce this criminal act,” Casilao said in a statement.

“While the country is bearing the onslaught of the COVID-19 pandemic, state-backed mercenaries and death squads remain on the loose and wreaking havoc on activists and freedom fighters,” Rafael Mariano, KMP chairperson emeritus said.

For his part, Casilao pointed out that “Duterte has already signed the death order of activists and peace consultants upon the enactment of the anti-terrorism law.”

He vowed that they will seek justice for the death of Echanis and other victims of alleged state-sponsored killings, at any cost.

From activist leader to peace negotiator

Aside from his role as National Democratic Front peace consultant, Echanis, 72, was also the deputy secretary-general of KMP.

Anakpawis noted that Echanis spearheaded nationwide campaigns for genuine agrarian reform including free land distribution to Filipino farmers, and was instrumental in crafting the Genuine Agrarian Reform Bill repeatedly filed in Congress since its first filing in 2007.

He was also a member of the NDFP Reciprocal Working Committee on Socio-Economic Reforms.

“Echanis was arrested and detained three times during the Marcos, Aquino, and Arroyo regimes. Despite this, he continued his advocacy work advancing peasant’s rights after his release in 2010,” the party-list added.

INQUIRER.net has contacted Malacanang, but it has yet to issue a statement on the matter.

Echanis is the third NDF consultant killed in the country.

Sotero Llamas who served as consultant during the peace talks between the government and the National Democratic Front was killed in Albay by three unidentified gunmen in 2006.

Meanwhile, NDF peace consultant Randy Malayao, was killed by a gunman in 2019 while sleeping inside a bus in a stopover in Aritao, Nueva Vizcaya. (with Jodee A. Agoncillo)