BEIRUT, Lebanon — Two members of Lebanon’s government have quit over a deadly blast that unleashed public rage against the country’s ruling class, with protesters and police fighting running battles in the capital for a second day. 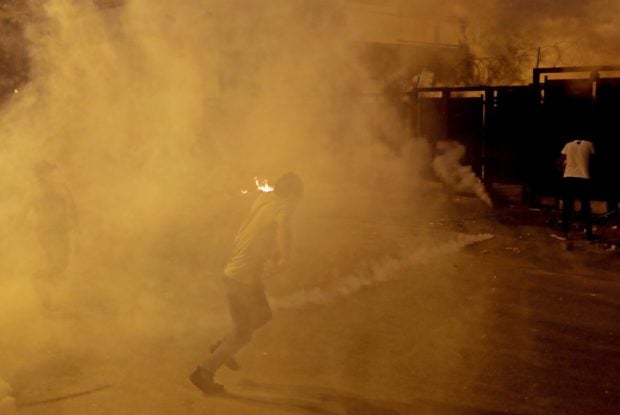 A young Lebanese anti-government protester covers his face from tear gas fired by police during the second day of protests in downtown Beirut on August 9, 2020 to denounce this week’s massive port blasts that killed more than 150 people and left the heart of the Lebanese capital in ruins. Lebanon’s political elite faced pressure from all sides after the deadly port explosion blamed on official negligence, with the first cabinet resignation over the affair and angry protesters clashing with security forces. The catastrophe has revived the mass anti-government protests that had for months demanded the wholesale removal of Lebanon’s political elite, until coronavirus lockdown measures brought an uneasy calm. Photo by JOSEPH EID / AFP

As hopes faded of finding any survivors of Tuesday’s explosion, information minister Manal Abdel Samad and environment minister Damianos Kattar both announced their resignations Sunday, in a further hit to the embattled government of Prime Minister Hassan Diab.

Calling the explosion an “enormous catastrophe,” Kattar said he had lost hope in a “sterile regime that botched several opportunities.”

Hundreds gathered again in and around Martyrs’ Square, a short walk from the port where the devastating explosion occurred, killing at least 158 people and injuring a staggering 6,000, many bloodied by flying glass.

“Those who died paid the price of a state that doesn’t care about anything except power and money,” said protester Tamara, 23, whose friend Rawan, 20, was killed in the blast.

“It’s not enough that ministers resign,” said her friend Michel.

“Those who put the explosives there must be held accountable. We want an international tribunal to tell us who killed (Rawan).”

Police later fired tear gas in an attempt to disperse protesters who hurled stones and let off fireworks near a street leading to parliament, AFP correspondents said.

Many wore helmets and gas masks, some wielded makeshift shields and others rushed to pick up smouldering tear gas shells and threw them back towards police.

‘My government did this’

While it is not known what started the fire that set off a huge stockpile of ammonium nitrate, protesters say the disaster could not have happened without the corruption and incompetence that have come to define Lebanon’s ruling class.

A picture went viral online showing the city’s devastated port, with a low wall in the foreground bearing the spray-painted message: “My government did this.”

The disaster has revived anger at a ruling class seen as living in luxury while millions endure job losses, deepening poverty, power blackouts and garbage mountains piling up in the streets.

“Instead of deploying the army to help residents clear rubble from their homes, businesses, and communities, the Lebanese authorities chose to deploy them and other security forces against protesters.”

The August 4 explosion came as Lebanon was already reeling from an economic crisis that has seen its currency collapse, plunging swathes of its population into poverty, and struggling with a spike in coronavirus cases.

On Sunday, French President Emmanuel Macron oversaw a UN-backed virtual donor conference that pledged 250 million euros ($294 million) in aid for the cash-strapped country, where some 300,000 people were rendered homeless by the disaster.

In a joint statement, donors pledged the assistance would be “directly delivered to the Lebanese population” under the supervision of the UN.

The UN said about $117 million would be needed over the next three months for health services, emergency shelter, food distribution and programmes to prevent the further spread of COVID-19, among other interventions.

The donors also offered support for an “impartial, credible and independent inquiry” into the disaster —something Lebanese President Michel Aoun has dismissed, saying it would only “dilute the truth.”

US President Donald Trump urged Lebanese authorities “to conduct a full and transparent investigation, in which the United States stands ready to assist.”

The revelation that Lebanese state officials had long tolerated a ticking time-bomb in the heart of the capital has served as shocking proof to many Lebanese of the rot at the core of the state apparatus.

Diab said Saturday he would propose early elections to break the impasse that is plunging Lebanon ever deeper into political and economic crisis.

Parliament speaker Nabih Berri called a meeting of the legislature on Thursday “to question the government on the crime that struck the capital,” state media said.

Politics in multi-confessional Lebanon is dominated by former warlords from the 1975-1990 civil war who have exchanged their military fatigues for suits, or were replaced by relatives.

While there are Sunni Muslim, Christian and myriad other groups, the most powerful is the Shiite Hezbollah movement.

Read Next
PhilHealth chief’s medical leave won’t hamper Senate probe, filing of charges – Sotto
EDITORS' PICK
Water remains our saving grace right now
House to probe Facebook takedown of gov’t accounts
Despite toll, never too late to fight pandemic—WHO chief
Get 80% OFF Ignite 2020 Cyber Tickets starting 28 September
Smart poised to turn PH into ‘Smart 5G country’ with nationwide rollout
Feud is over: Velasco next Speaker on Oct. 14
MOST READ
Velasco to take over as Speaker on Oct. 14
2 PDP-Laban allies in House jump over to Lakas-CMD
LOOK: The Mountain from ‘Game of Thrones’ welcomes first son with wife
Gun attack in PMA: Air Force man killed, 2 others wounded
Don't miss out on the latest news and information.