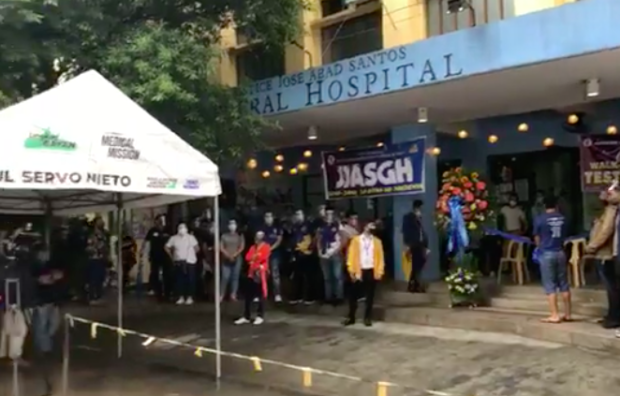 Domagoso made the announcement on ABS-CBN News Channel.  He said that the current occupancy rate at the hospital for pregnant women is already at 233 percent.

(The other day, we stopped admitting patients at Justice Jose Abad Santos General Hospital for pregnant women who are set to deliver their babies because we have already reached 233 percent of our load capacity.)

(That day alone, we had six pending Caesarean delivery cases.  So as not to overwhelm and further expose the medical staff, some were sent to the nearby Gat Andres Bonifacio Hospital.)

In a Facebook post on Sunday, the JJASGH said it temporarily closed its facilities for women set to deliver babies starting 5 p.m. on Saturday.

The hospital management advised pregnant women to proceed to other hospitals following this development.

(Please await further announcement on when the JJASGH will again accept pregnant women for delivery of their children. Thank you for your understanding.)

Read Next
Hundreds rally against detention of Thai protest leaders
EDITORS' PICK
House to probe Facebook takedown of gov’t accounts
Smart poised to turn PH into ‘Smart 5G country’ with nationwide rollout
Water remains our saving grace right now
Feud is over: Velasco next Speaker on Oct. 14
Get 80% OFF Ignite 2020 Cyber Tickets starting 28 September
Duterte meets with Cayetano, Velasco amid speakership issue
MOST READ
Velasco to take over as Speaker on Oct. 14
‘I offered to resign’ because of endless corruption, says Duterte
Gun attack in PMA: Air Force man killed, 2 others wounded
AMLC investigator says De Lima not involved in Bilibid drug trade
Don't miss out on the latest news and information.