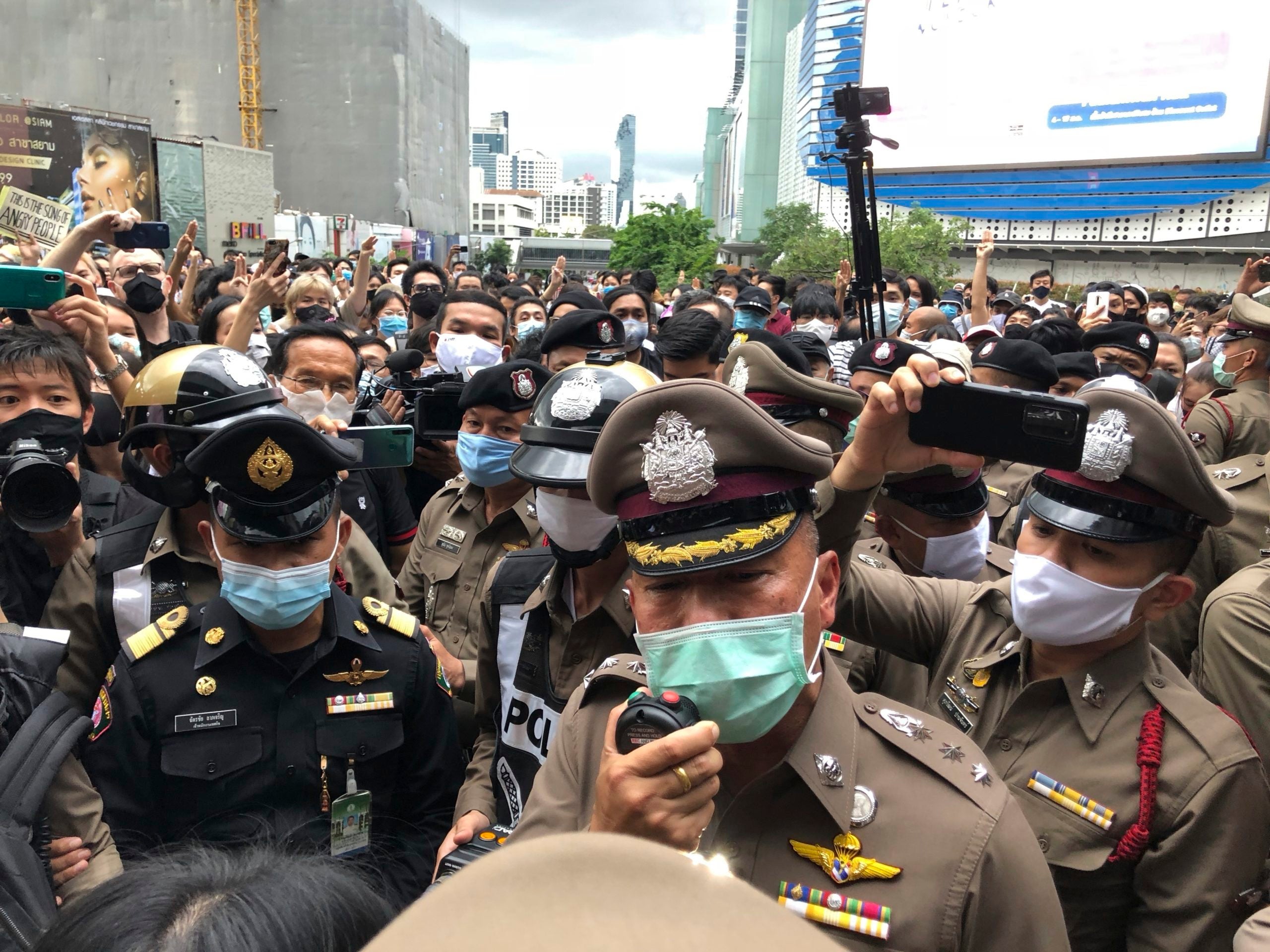 A police officer tries to speak to a crowd at an anti-government gathering Saturday, Aug. 8, 2020, in Bangkok, Thailand. Political tensions are rising in Thailand as pro-democracy activists vowed to step up protests against the government and police arrested some key figures in recent demonstrations. (AP Photo/Jerry Harmer)

Around 800 demonstrators packed a concourse near a shopping mall in central Bangkok to hear speeches denouncing the arrests and call for Prime Minister Prayuth Chan-ocha to resign.

Tensions rose briefly as police officers moved in, telling the crowd they were only observing. They withdrew to a chorus of boos and chants for them to get out.

After a period of relative calm in Thailand’s fractious politics, the temperature is rising again with a wave of anti-government protests. Many have been held on school and university campuses in Bangkok and other cities.

They reflect a growing anger among many young people with the Prayuth administration. The former army chief took power in a 2014 coup, then retained stayed in office through an election in 2019 widely seen as heavily rigged in his favor.

On Friday police arrested Arnon Nampha, a civil rights lawyer and a leading figure in the burgeoning protest movement. He was charged with sedition and defying an emergency decree to control the coronavirus. Critics say the decree is being wielded against political dissidents.

They also detained a second activist, Panupong Jadnok. Both men appeared in court on Saturday in Bangkok and were granted bail.

The protestors are demanding the dissolving of parliament, new elections and an end to police intimidation. They have called for a big rally next weekend.

Read Next
Senior Citizens party-list Rep. Datol passes away
EDITORS' PICK
House to probe Facebook takedown of gov’t accounts
Water remains our saving grace right now
Duterte meets with Cayetano, Velasco amid speakership issue
Velasco to take over as Speaker on Oct. 14
Smart poised to turn PH into ‘Smart 5G country’ with nationwide rollout
Get 80% OFF Ignite 2020 Cyber Tickets starting 28 September
MOST READ
Velasco to take over as Speaker on Oct. 14
Gun attack in PMA: Air Force man killed, 2 others wounded
‘I offered to resign’ because of endless corruption, says Duterte
Duterte will ask Congress to abolish PhilHealth
Don't miss out on the latest news and information.