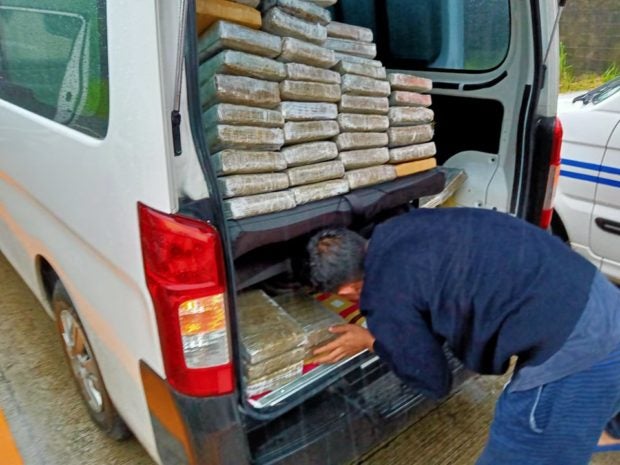 The driver of a van that was used to transport the contraband made this claim, according to

Retired Gen. Ramsey Ocampo, vice president for security of the Clark Development corp. – Public Safety Department (CDC-PSD) in a telephone interview said the van driver, who was not identified, claimed that he came from Tugegarao City.

“It is far-fetched that he (driver) could have lost his way around here because he is a resident of Mabalacat City, which is just outside Clark,” Ocampo told the Inquirer by phone.

Ocampo said the white traveled through Clark South gate of the Subic-Clark-Tarlac Expressway at past 2 a.m.

When the driver refused inspection, the CDC-PSD alerted other law enforcement units.

Ocampo said the driver and his assistant were spotted disposing packages at around 4 a.m. in the vicinity of Marcos Village and a community where many foreigners reside.

The driver claimed that the marijuana bricks were supposed to be delivered to Metro Manila.

ADVERTISEMENT
Read Next
Tropical Storm ‘Enteng’ slightly intensifies ahead of PAR exit
EDITORS' PICK
House to probe Facebook takedown of gov’t accounts
Water remains our saving grace right now
Duterte meets with Cayetano, Velasco amid speakership issue
Velasco to take over as Speaker on Oct. 14
Smart poised to turn PH into ‘Smart 5G country’ with nationwide rollout
Get 80% OFF Ignite 2020 Cyber Tickets starting 28 September
MOST READ
Velasco to take over as Speaker on Oct. 14
Gun attack in PMA: Air Force man killed, 2 others wounded
‘I offered to resign’ because of endless corruption, says Duterte
Duterte will ask Congress to abolish PhilHealth
Don't miss out on the latest news and information.