MANILA, Philippines — One of the two runaway ostriches seen inside a subdivision in Quezon City reportedly died due to stress and the other bird had been turned over to a government animal shelter, according to the Department of Environment and Natural Resources (DENR).

The death of the huge flightless bird was a tragic ending to what had been a source of odd amusement on social media for a pandemic-weary public who saw the video of the pair running loose inside Mapayapa Village III in Diliman on Tuesday.

Jonathan Cruz, who claimed to be the owner of the birds, brought the second ostrich to the Wildlife Rescue Center (WRC) at Ninoy Aquino Parks and Wildlife Center on Friday afternoon, according to Dr. Esteven Toledo, a veterinarian with the Biodiversity Management Bureau.

The 9-month-old female ostrich was in good health, with no injuries, said Toledo.

Cruz told the authorities at WRC that he was cleaning the birds’ enclosure earlier on Tuesday morning when they escaped through the gate, which he had forgotten to close, Toledo said.

He said Cruz reported that the other bird had died due to stress.

“We asked him to provide proof of death or conduct a necropsy or autopsy to find out the cause of [the] bird’s death,” Toledo said in a phone interview on Friday.

It was not immediately clear whether the ostrich that died was the one shown in one video being subdued by a security guard and several other men.

The surviving ostrich will be the first to be housed at the animal rescue center — originally a temporary shelter and rehabilitation facility for abandoned, donated or confiscated wildlife that became a permanent home for these animals, many of them from other countries and endangered. 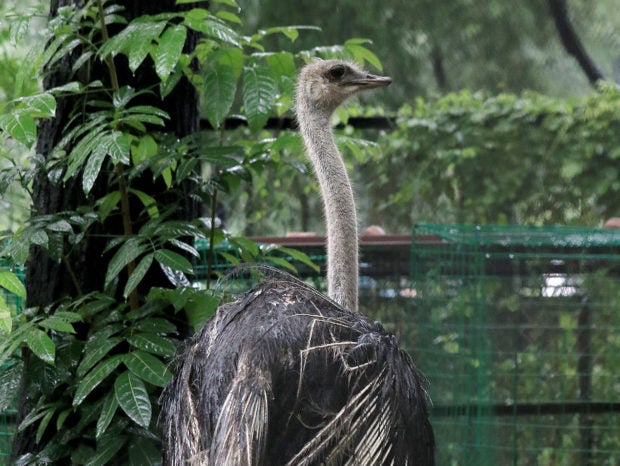 SURVIVOR This 9-month-old female ostrich was one of two that were running loose inside Mapayapa Village III in Quezon City. —RICHARD A. REYES

The mini zoo’s newest addition came from the Philippine Ostrich and Crocodile Farms Inc., a registered ostrich breeder in Opol town, Misamis Oriental province, according to a transport permit and a veterinary certificate presented by Cruz.

The documents indicated that there originally were 12 birds—five males and seven females—that were to have been shipped from the Opol farm to a certain Edwin Jara in Nueva Ecija province, in October 2019 when they were just 3 weeks old for “propagation purposes.”

Ostriches are a source of meat and leather.

Toledo said it was uncertain whether the rest of the birds made it to Nueva Ecija province or somewhere else.

Wildlife law enforcer Rogelio Demelletes Jr. on Saturday said environment officers in Central Luzon had no record of any ostrich arrival from October last year up to the present.

Demelletes said the birds may have been bought from Jara, but without purchase documents, Cruz may face charges of illegal trading, possession and transport of wildlife.

DENR National Capital Region (NCR) Executive Director Jacqueline Caancan said the transport permit did not allow nor explain why the two ostriches were in Metro Manila.

“Whether you are a pet owner or a wildlife enthusiast, you have to have proof with the DENR that these animals are legally acquired and that these are registered,” she told the Inquirer. “The transport permit they are showing would not work because it does not indicate that the birds were going to NCR.”

Ostriches are considered wildlife and require permits and other documents under Philippine law, Toledo said.

“If you are engaged in ostrich farming, you should be technically and financially capable,” he added.

Caancan said her office would investigate the case further. “Based on our records, there are no registered ostriches in Mapayapa Village,” she said.

The Philippine Animal Welfare Society (PAWS) on Saturday said the owner of the birds must be held liable under the Animal Welfare Act for the death of one of the ostriches.

“The place where they were kept in contributed to the stress and caused the ostrich’s death,” PAWS executive director Anna Cabrera told the Inquirer.

Cabrera said that if no permits were secured to keep the animals, the owners should also be charged with violation of the Wildlife Resources Conservation and Protection Act.